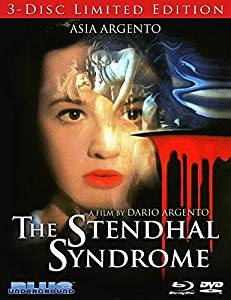 Dario Argento has always been one of my favorite director. When I heard that “The Stendhal Syndrome” was coming in a big 3 disc set, I figured maybe it would a good time to check out this film out since I’m big fan of this work.

The film focuses on a police detective (Asia Argento) who’s trying to stop a series of murders caused by an attractive man. During the case, she starts to develop a mental illness where she starts seeing any works of art that causes her to lose her mind. As she further descends into madness, the bodies start piling up as she struggles to keep her sanity and find out who is behind these killings. The film also stars Thomas Kretschmann (Avengers: Age of Ultron, King Kong) and Marco Leonardi (Cinema Paradiso).

Going into this film, I’ve loved Argento’s previous works like “Suspira”, “Inferno” and “Tenebre” as I consider them his best works. “The Stendhal Sysdrome” is one that I wouldn’t put up there with those films even though this is a very good film. The film falls between “Opera” and “Dracula” which I liked a lot for its gothic tone and take heat for liking it. Thankfully, it wasn’t like the god awful “Giallo” which is his worst by far. Yes, it’s really a bad film and one of the worst I’ve seen.

Dario Argento does a very good job with the way that he directs this film. Whether it was the way that he directs the action to how he makes everything in the film feel very dark and dreary, it’s done to give an uneasy feel to what you are watching. I was feeling creeped out by some of the scenes, as it felt graphic and uneasy to watch. It also helps that he has a great score from composer Ennio Morricone. The other thing he does very well is to get the performances that makes this good. I liked he’s able to make sure the performances have a dark tone to it. Argento takes his time as he makes sure that his cast’s performances fit the film’s dark and surreal tone. It added to the creepiness that this film has going for it.

The screenplay written by Dario Argento and Franco Ferrini was good. The screenplay does a great job focusing on the main character and her state of mind. They made sure that it was one of the focal points as they spend a lot developing the trauma and the effects the main character is going through because of it. It’s makes the character an interesting one kept going throughout. The other thing that they do very well is to make everything dark from start to finish. Whether it was the surreal images that we see to the film’s uneasy action, its done in a way to project a horrific tone that stays with this after seeing it. It’s what makes all the horror aspects work in this film.

The three disc set is pretty loaded. The first two discs include the DVD and Blu-Ray of the film. The discs also boasts news extra. First, the film’s audio commentary track with author Troy Howarth (So Deadly, So Pervesre). This is a great track as Howarth does a very good job going over the history and facts of the production and give good analysis on some of the scenes. Another thing that I liked was that he also goes into the history of the principals involved. It keeps the track moving and you’re given some good information about them that you might have not known.

The release also includes a bonus disc of more interviews taken from Blue Undergrounds 2007 disc. It features interviews from director Dario Argento, psychological consultant and author of which this film is based on Graziella Magherini, special effects artist Sergio Sticaletti, assistant director Luigi Cozzi and production designer Massimo Antonello Geleng. This was very good as there were a lot of information on the production. Whether it’s about the disorder known as Stendhal Syndrome to stories about the making of the film to the relationships that each of them had with Dario, everything is interesting and worth watching if you’re into the works of Dario Argento.

This 3 disc set might be the most definite edition of “The Stendhal Sysdrome” to come out on blu-ray as Blue Underground does a great job with this release. The film is one of those films that is so disturbing to watch and is Argento’s most disturbing film. With its great extras and very disturbing film that will shock you, this will be please fans of Argento’s earlier work.