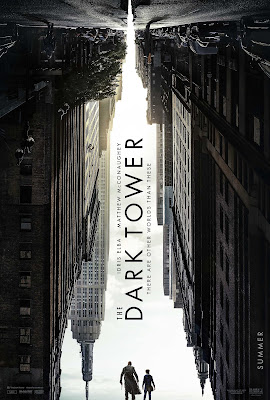 'THE DARK TOWER': Two and a Half Stars (Out of Five)

A fantasy-western adapted from Stephen King's novel series (of the same name), and it's actually a continuation of that story (with a planned TV series to follow). The film tells the story of an 11-year-old boy that's transported to another dimension, where he meets a gunslinger on a quest to reach the 'Dark Tower' (which will help him save all of humanity). The movie stars Idris Elba, Tom Taylor and Matthew McConaughey. It's received mostly negative reviews from critics, and it's performed modestly at the Box Office so far. I found it to be pretty disappointing as well, and mostly a bore.

Jake Chambers (Taylor) is an 11-year-old boy who's able to see into another dimension, called Mid-World. His parents believe his visions are a form of mental illness though, and they try to get him professional help for it. While being pursued by demons from this other world, Jake is transported to the other dimension. There he meets a gunslinger (Elba) on a quest to reach the 'Dark Tower', which is believed to have the power to save all of humanity. An evil sorcerer (McConaughey) is also trying to reach the tower though, for his own evil purposes.

While the film is well cast (you can't get much better than Elba and McConaughey as your two leads), it's also very poorly directed and edited. The film just feels like a mess, and it's never very interesting or involving. Parts of it are amusing though, and some of the effects are cool, but it seems like the book series (which I haven't read) deserved a much better film adaptation. Hopefully the upcoming TV series is much better.
at 11:41 AM
Labels: Columbia Pictures, Idris Elba, Matthew McConaughey, Reviews, The Dark Tower