Sofia Coppola's "The Beguiled" Lands on DVD and Blu-Ray 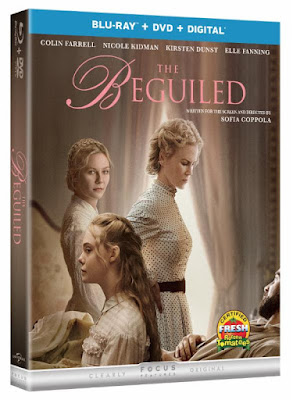 Special features on the DVD and Blu-Ray includes A Shift in Perspective (Filmmakers and cast discuss how this version of The Beguiled is a departure from the novel of the same name and its earlier film adaptation. Screenwriter/director Sofia Coppola describes how the talented cast helped bring her vision to life.) and A Southern Style (Discover how costumes, hair, and many other elements came together to create an immersive experience not only for the audience but also for the actors.).

"The Beguiled" hits VOD on September 26th and retail on October 10th.

The Beguiledunfolds during the Civil War, at a Southern girls' boarding school. Its sheltered young women take in an injured enemy soldier. As they provide refuge and tend to his wounds, the house is taken over with sexual tension and dangerous rivalries, and taboos are broken in an unexpected turn of events.