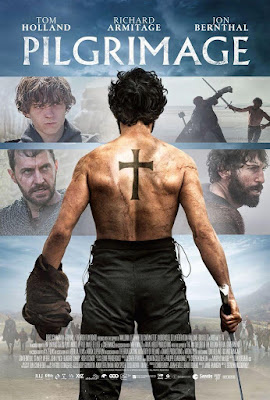 'PILGRIMAGE': Four and a Half Stars (Out of Five)

An Irish medieval thriller starring Tom Holland (now of 'SPIDER-MAN' fame) and Jon Bernthal (of TV's 'THE PUNISHER' fame, and 'THE WALKING DEAD'). It tells the story of a group of Irish monks (in 1209 Ireland) transporting a holy relic to Rome. When they realize just how important the relic is, their journey becomes much more dangerous. The movie costars Richard Armitage, Stanley Weber, John Lynch and Eric Godon. It was directed by Brendan Muldowney, and it was written by Jamie Hannigan. It's received mostly positive reviews from critics, and it's being released on VOD and at the Box Office (in limited indie theaters) this weekend. I really enjoyed it.

The story is set in 1209 Ireland, a time when tribal wars were extreme and Norman invaders were becoming more dominant. A group of monks are tasked with delivering their holiest relic to Rome. They're lead by a young Novice (Holland), and a mute lay-brother (Bernthal) with a mysterious and violent past. As the monks realize how valuable and significant the relic is (to others as well), their journey becomes much more dangerous (and quite bloody). Disputes between the monks themselves also become a serious problem.

The film is pretty well made, acted and it's quite involving. It's pretty dark, and it's also surprisingly graphically violent! It has some pretty good commentary to deliver on religious beliefs too, and the horrific power many people give them. It also has three good performances from Holland, Bernthal and Armitage. Holland actually reminds me a lot of Frodo in the film, he looks a lot like him and there's even a lot of parallels between the two roles (and the movies even). Armitage is a great villain too, but the coolest part of the film has got be Bernthal as the badass mentally unstable antihero. I had a lot of fun watching him dominate his action scenes. It's an entertaining movie for sure.
at 3:51 PM
Labels: Jon Bernthal, Pilgrimage, Reviews, RLJ Entertainment, Tom Holland