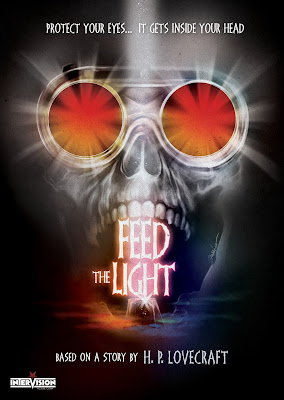 David Lynch’s recent relaunch of “Twin Peaks” has gotten me into the mood of watching films that have a very surrealist and bizarre tone to them. My renewed interested in surrealistic films coupled with the fact that the film is based on the H.P. Lovecraft story “The Colour Out of Space”, it was safe to say that I needed to check out not caring if this is a Swedish horror film or the fact that it has subtitles . I was seeing this no matter what.

The film is about a mother who is looking for her daughter after she is taken from her by her ex-husband. She tracks them to an institution where unexplained things are happening causing people to disappear. What she finds is an underworld that feeds off people as its trying and turning everything into darkness. Can she find a way to escape with her daughter before she is trapped in the darkness forever?

Going into “Feed the Light”, as I was expecting this to be one of those films that would grab me since it’s the tone and the looked so surreal. I enjoyed this film a lot. This was easily one of the most surreal films that I’ve seen this year as it’s a very dark and haunting film.

One of the reasons that I enjoyed this was the cinematography and directing from Henrik Moller. He does a very good job creating this surreal world through the way he approaches his screenplay and the way that he films the scenes. It helped gives this film a very bizarre tone that helps make the action work and how the images are seen. Also, I liked how he’s able to make sure the pictures has a film has a bleak black and white feel to them with splashes of bloody red for most of the film. This help added to film’s gothic and bizarre tone. Muller also does a good job with the way that he directs the cast. He makes sure that his cast has this frantic and dark tone to their performances. It helps drive home the film’s action and makes this a surreal experience.

The screenplay written by Moller and Martin Jirham does very good job making sure the screenplay focuses on its main character. Whether it’s her struggle to find her daughter to her struggles to survive, they do a good job making sure that she is the focus. This made the story very interesting. The other thing that I liked about the screenplay was the fact that they makes sure that the surrealism makes sense with the story. Sometimes I’ll see films were the surrealism makes you feel like you’re lost and don’t know what’s going on. This film doesn’t do that as it sticks to the film’s story and makes sense with what happens.

The blu-ray doesn't have many features as it has a behind the scenes featurette that features interviews from the cast and crew and “The Lovecraft Influence” an interview with director Henrik Moller.