"Dave Made A Maze" Review by Tim Hellman 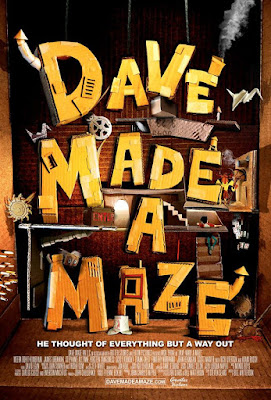 'DAVE MADE A MAZE': Four and a Half Stars (Out of Five)

An indie horror-comedy adventure about a struggling artist that somehow magically creates a giant maze in his living room, that's contained inside a small cardboard fort. When he gets lost in the dangerous labyrinth, his girlfriend leads a team of their friends into the maze to rescue him. The film was directed by debut feature filmmaker Bill Watterson, and it was written by Watterson and Steven Sears (a debut feature screenwriter). The movie stars Nick Thune, Meera Rohit Kumbhani, Adam Busch, James Urbaniak, Frank Caeti, Scott Narver, Stephanie Allynee, John Hennigan and Kirsten Vangsness. I found the film to be extremely original, bizarrely inventive, beautiful to look at, and quite amusing.

Dave (Thune) is a frustrated artist that feels like he hasn't created anything significant in his life, even though he's now over 30-years-old. While creating a cardboard fort in his living room, Dave somehow (magically) creates a gigantic maze inside it. The maze is full of deadly booby traps and vicious creatures, including a monstrous minotaur (Hennigan). When Dave gets lost in the maze, his girlfriend, Annie (Kumbhani), leads a team of their friends into the cardboard fort to find him (against Dave's warnings).

The movie is definitely unique and creative, but it's also surprisingly beautiful to watch at times. The filmmakers really made the most of their budget. It's kind of a horror movie, but it's never really gory or even truly violent. You'll have to see it to know what I mean for sure, but I've seen far worse on Adult Swim (and even network TV). The actors are all funny in it, and well cast, and the story is kind of sweet hearted even. I had a fun time watching it, from the opening credits scene (which is also impressively creative) on. I think most film fans, looking for something different, will have an equally good time watching it too.
at 8:47 PM
Labels: Dave Made a Maze, Gravitas Ventures, Reviews