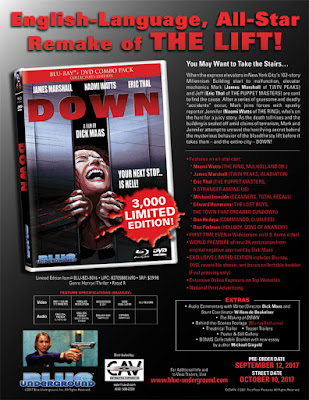 "Down" hits retail on October 10th.

You May Want to Take the Stairs

When the express elevators in New York City's 102-story Millennium Building start to malfunction, elevator mechanics Mark (James Marshall of TWIN PEAKS) and Jeff (Eric Thal of THE PUPPET MASTERS) are sent to find the cause. After a series of gruesome and deadly accidents occur, Mark joins forces with spunky reporter Jennifer (Naomi Watts of THE RING), who's on the hunt for a juicy story. As the death toll rises and the building is sealed off amid claims of terrorism, Mark and Jennifer attempt to unravel the horrifying secret behind the mysterious behavior of the bloodthirsty lift before it takes them - and the entire city - DOWN!

Michael Ironside (SCANNERS), Edward Herrmann (THE LOST BOYS), Dan Hedaya (COMMANDO), and Ron Perlman (HELLBOY) co-star in this big-budget remake of THE LIFT helmed by original Writer/Director Dick Maas(AMSTERDAMNED). Previously released on home video in a cropped full-frame transfer as THE SHAFT, Blue Underground is now proud to present DOWN in a brand-new widescreen 2K restoration from the original negative, approved by Dick Maas!
at 11:15 AM
Labels: Blue Underground, Down, DVD/Blu-Ray News, Naomi Watts