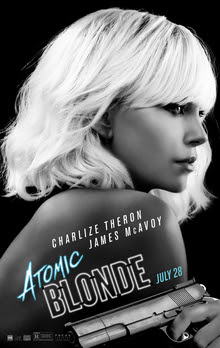 The new spy thriller starring Charlize Theron (who also served as a producer of the movie) and James McAvoy. It's based on the 2012 graphic novel 'The Coldest City' (by Antony Johnston and Sam Hart), and it tells the story of an elite MI6 agent that's tasked with taking down an espionage ring in Berlin (during the collapse of the Berlin Wall in 1989). It was directed by David Leitch (who also co-directed the first 'JOHN WICK', uncredited, and the upcoming 'DEADPOOL 2') and it was written by Kurt Johnstad (who also co-wrote'300' and it's sequel (which were also both based on popular graphic novels). The movie costars John Goodman, Toby Jones, Sofia Boutella, Eddie Marsan and Roland Moller. It's received mostly positive reviews from critics, and it's also a mild hit at the Box Office. I had a lot of fun watching it.

It's 1989, during the eve of the collapse of the Berlin Wall. An Undercover MI6 agent has just been murdered in Berlin, and a powerful espionage ring is believed to be responsible for it. An elite MI6 agent named Lorraine Broughton (Theron) is sent to Berlin to retrieve a list of double agents there, that are being moved into the West secretly. She's ordered to work with a Berlin station chief, named David Percival (McAvoy), who she does not trust in the slightest. A lot of very bloody action ensues.

The movie is really well directed by Leitch, and Theron once again gives it her all in the lead (and she makes an amazing, and very sexy, action heroine). I had a lot of fun watching the very violent (and quite bloody) fight scenes, car chases and shootouts, but the story just didn't interest me at all. I didn't find it involving in the slightest, except for a few brief scenes. Still if you love amazingly well constructed action scenes, and Charlize Theron, you should definitely get a kick out of this film.
at 7:12 PM
Labels: Atomic Blonde, Charlize Theron, Focus Features, James McAvoy, Reviews