"The House" Review by Tim Hellman 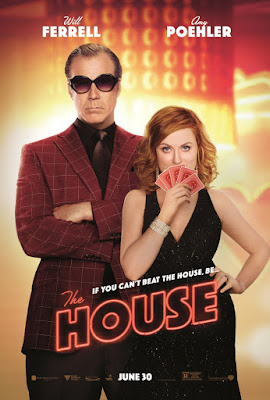 'THE HOUSE': Four Stars (Out of Five)

The new comedy starring Will Ferrell and Amy Poehler, as a married couple that lose their daughter's college fund and then start an illegal casino to try and get it back. The movie costars Jason Mantzoukas, Nick Kroll, Ryan Simpkins, Michaela Watkins and Jeremy Renner. It was directed by Andrew Jay Cohen (in his feature film directorial debut) and it was written by Cohen and Brendan O'Brien (the duo also co-wrote 'NEIGHBORS' and 'MIKE AND DAVE NEED WEDDING DATES'). It's received mostly negative reviews from critics, and it's also disappointed at the Box Office so far. I think, for the most part, it's a pretty funny movie.

Scott (Ferrell) and Kate Johansen (Poehler) are excited that they're daughter, Alex (Simpkins), gets into the college she wants to go to, although they're sad she'll be leaving them. Then they find out that the scholarship their daughter was promised, by the city, is being taken away to fund a swimming pool for everyone. Their neighbor, and best friend Frank (Mantzoukas), is about to lose his house, and his wife (Watkins) left him. So Frank convinces the couple to help him run a casino, in his house, to raise the money they need to send their daughter to college still, and to help him keep his house. Scott and Kate reluctantly agree to the crazy idea.

I wasn't expecting a lot from this film, due to the reviews and I haven't loved the last few Will Ferrell movies, but it's surprisingly funny. It's definitely over-the-top and completely ridiculous, it's also really dark as well in places. So I'm sure some viewers will definitely not enjoy it, but I thought it was hilarious in places. It's definitely not all laugh-out-loud funny, but it has a lot of great moments. I was mostly impressed.
at 8:26 PM
Labels: Amy Poehler, Reviews, The House, Warner Brothers, Will Ferrell