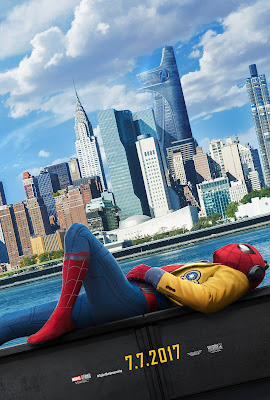 The second reboot of the 'SPIDER-MAN' film franchise, based on the Marvel Comics character of the same name. This one is co-produced by Marvel Studios (for the first time), with Sony Pictures (who previously held the film rights) distributing the movie. It's the 16th film in the Marvel Cinematic Universe, and it integrates the Peter Parker/Spider-Man character into the Marvel film universe for the first time. The movie has Parker (now played by Tom Holland) as a 15-year-old high school student, that's trying to balance being a super hero, fighting a new villain called Vulture (played by Michael Keaton, of 'BATMAN' and 'BIRDMAN' fame), and school life (all at the same time). The movie also costars Jacob Batalon, Laura Harrier, Zendaya, Marisa Tomei, Robert Downey Jr. (as Iron Man/Tony Stark of course, once again), Jon Favreau, Tony Revolori, Bokeem Woodbine, Michael Chernus, Martin Starr and Donald Glover. It was directed by Jon Watts (who's also helmed such indie hits as 'CLOWN' and 'COP CAR') and it was written by Jonathan Goldstein, John Francis Daley, Chris McKenna, Erik Sommers, Watts and Christopher Ford (a usual writing partner of Watts). The film has received mostly positive reviews from critics, and it's of course another big hit at the Box Office for Marvel Studios. Being a huge Spider-Man fan, I was severely disappointed with this movie!

The story begins in 2012 when a salvage company, ran by Adrian Toomes (Keaton), is ran out of business by Tony Stark (Downey Jr.), but not before Toomes, and his employees, steal some alien technology from a New York site they were working at. They then sell the technology to other criminals, and Toomes builds a suit with it that enables him to fly (and he also takes on the nickname Vulture). 8 years later Peter Parker (Holland) is recruited by Stark to help fight Captain America, and he gives him a special suit to fight criminals with. Parker is eager to become a superhero, while also trying to live a normal high school life. His first major opponent becomes Vulture.

I think the film is well directed, acted and even well written (to a certain extent). I also love how minimal the action scenes are, and I like how the villain isn't really that bad of a guy in it. Still I hate how much Marvel changed the source material. This is kind of a good superhero film, but it's just not a good Spider-Man movie (if they would have called it something else, that would have made it a much better film in my opinion). I also don't like how sexist the casting of this film is, all of the women are really attractive in it (including Aunt May, which is ridiculous), and all of the guys are pretty nerdy (even Flash, which is equally ridiculous). I also hate that it's yet another superhero movie that makes rich people the heroes, while the poor hard working Americans are the villains. Tony Stark should not even be in this film too, it's absurd that he's Spider-Man's mentor! So I really hate so much about this film, and I think Marvel is one of the most evil and corrupt businesses in the world, but I have to admit it's still a well made movie. Spider-Man used to be my favorite superhero though, and now Marvel has ruined him for me.
at 8:32 PM
Labels: Marvel Studios, Michael Keaton, Reviews, Robert Downey JR., Sony Pictures, Spider-Man Homecming, Tom Holland