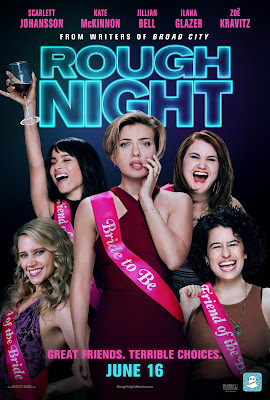 'ROUGH NIGHT': Three and a Half Stars (Out of Five)

A dark comedy involving five friends that meet for a bachelorette party in Miami, ten years after four of them went to school together, and things go horribly wrong when they accidentally kill a male stripper. It stars Scarlett Johansson, Jillian Bell, Zoe Kravitz, Kate McKinnon and Ilana Glazer. Paul W. Downs, Demi Moore and Ty Burrell also costar in the film. It was directed by first time feature filmmaker Lucia Aniello, and it was written by Aniello and Downs (the duo also co-produced the flick). The movie's gotten better than average reviews from critics, but it's disappointed at the Box Office so far (many think for sexist reasons). I enjoyed it.

Jess (Johansson) is a somewhat successful politician that's currently running for office. She's also about to be married, and going on a bachelorette party, in Miami, with three old college friends (Bell, Kravitz and Glazer); whom she's become distant with over the years. Jess also invites her new friend, Pippa (McKinnon), who the others meet for the first time. After the girls all do cocaine together, and party at the clubs, they hire a stripper. When one of the friends accidentally kills the stripper, the women all panic and make things worse by trying to conceal their crime. The women all (of course) bond in the process.

The movie is funny, crude and very dark (until the end at least); all things that are great to see in a female driven film. The story is similar to a lot of previous dark male comedies though, but it's nice to see a female twist on it at least. I think all of the actresses do a good job in the movie, and it's mostly funny. I was disappointed with the climax though, which kind of gives the film a little bit too much of a lighter (more happy) ending. I don't want to ruin it for you, but the film is definitely not as dark as it promises to be.
at 7:31 PM
Labels: Kate McKinnon, Reviews, Rough Night, Scarlett Johansson, Sony Pictures, Zoe Kravitz