Official Trailer for the Upcoming Thriller "Til Death Do Us Part" 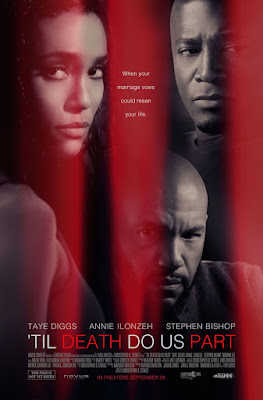 Novus Content and Footage Films recently released the trailer for their upcoming film "Til Death Do Us Part". The film stars Taye Diggs, Annie Ilonzeh and Stephen Bishop.

"Til Death Do Us Part" hits theaters in limited release on September 29th.

For more information of this film, you can visit the film's official website at: www.TilDeathDoUsPart-Movie.com

Michael & Madison Roland, had planned to spend the rest of their lives together, until one day Michael's controlling ways turned their perfect marriage, into an abusive rollercoaster no woman could survive. With the help of her best friend, Madison decides to get away. After adopting a new identity, she meets Alex Stone and learns to love again. All is well, until Michael discovers Madison's whereabouts, and recreates the nightmare she once lived all over again.


"Til Death To Us Part": Official Trailer