Official Poster for the Upcoming Neo-Western "Let the Corpses Tan" 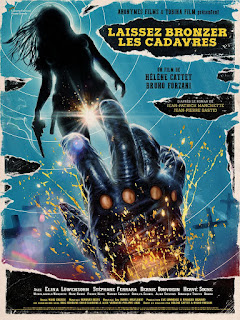 BAC Films recently released the official poster for their upcoming film "Let the Corpses Tan" The film is adapted from Jean-Patrick Manchette and Jean-Pierre Bastid's 1971 crime thriller. The film is directed by directing duo Hélène Cattet and Bruno Forzani (Amer, The Strange Color of Your Tears).

"Let the Corpses Tan" will be making its world premiere at Locarno Film Festival on August 4th.

Adapted from Jean-Patrick Manchette and Jean-Pierre Bastid's 1971 crime thriller, LET THE CORPSES TAN is the third feature from filmmaking duo Hélène Cattet and Bruno Forzani, whose previous works includes AMER and THE STRANGE COLOR OF YOUR BODY'S TEARS. Initially inspired by giallo, Cattet and Forzani continue their homage to genre with this thrilling neo-western.

The film will have its world premiere at the Locarno Film Festival on August 4th where Cattet and Forzani will be in attendance.