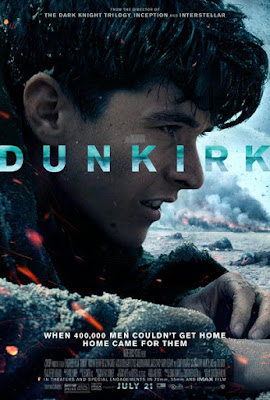 'DUNKIRK': Five Stars (Out of Five)

The new big-budget war film from writer/director Christopher Nolan. The movie tells the true story of the evacuation of allied soldiers (during World War II), from four different countries, that were surrounded by the German Army on the beaches of Dunkirk, France. It was filmed in Dunkirk, where the actual events took place, using real age-appropriate planes, and actual boats from that battle. The film stars Fionn Whitehead (in his feature film debut), Tom Hardy, Mark Rylance, Kenneth Branagh, Tom Glynn-Carney, Jack Lowden, Harry Styles, Aneurin Barnard, Barry Keoghan, James D'Arcy and Cillian Murphy. It's received nearly unanimous rave reviews from critics (with many calling it the best film of the year so far) and it's also another big hit at the Box Office. I think it's one of the best war films ever made.

The story takes place between May 26 and June 4th, of 1940 (in Dunkirk, France). Allied Forces (from Britain, Belgium, Canada and France) are surrounded by German soldiers, on the beaches of Dunkirk. The film follows efforts from the ground, the air, and the sea, to rescue the trapped soldiers (which was called Operation Dynamo). The whole time they're constantly attacked by the Germans (who are never seen on screen).

There's no real character development in the movie, you never know anything about their pasts (besides a few minor exceptions), because the filmmakers chose to focus solely on the event rather than specific people involved in it. I found the film to be all the more fascinating for this reason. I'm sure it will bore some viewers, but war movie fans (and history buffs) will love it; as well as most movie nerds and cinephiles. What I loved most about the film though is the drama, because it's never forced or manipulative (like most Hollywood movies are). The score is always very subtle, but really haunting, in the background; it never seems to try and make you feel anything specifically emotional for the characters. Still, the film is definitely a tear jerker, but it's more like watching something depressing in real life (to me). I think Nolan deserves every cent of his $20 million salary, he also gets 20% of the profits too (and he's now tied with Peter Jackson for the biggest payday ever for a filmmaker). The movie is definitely a masterpiece!
at 6:40 PM
Labels: Christopher Nolan, Dunkirk, Fionn Whitehead, Kenneth Branagh, Reviews, Tom Hard, Warner Brothers