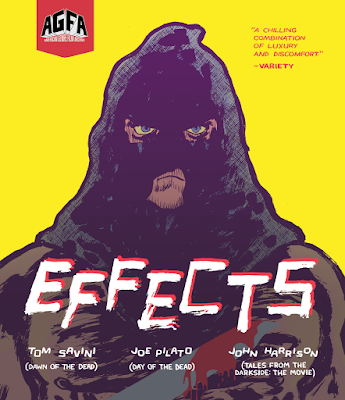 American Genre Film Archive recently send us information for their upcoming release of the cult classic "Effects". The film stars Tom Savini (Dawn of the Dead), Joe Pilato (Day of the Dead), and  John Harrison (Tales fom the Darkside: The Movie).

Special features on the Blu-Ray includes New 4K scan from the only surviving 35mm theatrical print, Archival commentary track with John Harrison, Dusty Nelson, and Pasquale Buba, AFTER EFFECTS documentary with optional commentary track, UBU and BEASTIE short films,  Liner notes by Joseph A. Ziemba of AGFA and Bleeding Skull and Reversible cover art with illustration by Charles Forsman (Netflix's THE END OF THE FU**ING WORLD).

Cobbled together with loose change by George Romero's friends, EFFECTS is a mesmerizing do-it-yourself horror movie starring Tom Savini (DAWN OF THE DEAD), Joe Pilato (DAY OF THE DEAD), and John Harrison (TALES FROM THE DARKSIDE: THE MOVIE). A group of coked-up filmmakers -- including Savini and Pilato -- gather in Pittsburgh to make a slasher called DUPED: THE SNUFF MOVIE. As filming begins and "accidents" happen, it's clear that something isn't right. And no one can be trusted. Landing somewhere between Michael and Roberta Findlay's SNUFF and a student film by John Carpenter, EFFECTS is a meta-enhanced takedown on the philosophy of horror that doubles as a sleazy and terrifying movie on its own.

"We were blown away to discover that we had the only existing 35mm theatrical print of EFFECTS at the archive," said AGFA director Joe Ziemba. "We're happy that we've been able to help the filmmakers create a new 4K transfer that will be seen by for years to come by audiences who appreciate the movie for the right reasons."

EFFECTS was produced by Harrison (director of TALES FROM THE DARKSIDE: THE MOVIE, composer of George Romero's CREEPSHOW and DAY OF THE DEAD), edited and produced by Pasquale Buba (editor of George Romero's KNIGHTRIDERS, CREEPSHOW, DAY OF THE DEAD, and MONKEY SHINES), and written and directed by Dusty Nelson (SAKURA KILLERS). Legendary horror icon Tom Savini also provided the film's visual effects.

"It was a good thing we didn't listen to those who thought we were crazy," said producer and star John Harrison. "EFFECTS was one of those magical moments in one's life when everything just seemed to come together."

To celebrate the release, AGFA teams up with the Alamo Drafthouse's Terror Tuesday series in Austin for a screening of EFFECTS on August 22 with a full cast and crew reunion. Tom Savini, Joe Pilato, John Harrison, Dusty Nelson, Pasquale Buba, and Zilla Clinton will be in attendance.

"To have the film 're-discovered' and appreciated 40 years later, is not only gratifying, but quite frankly, something I never even imagined," said director Nelson. "I can't wait to see it with the audience in Austin."
at 3:24 PM
Labels: American Genre FIlm Archive, Blu-Ray News, Effects