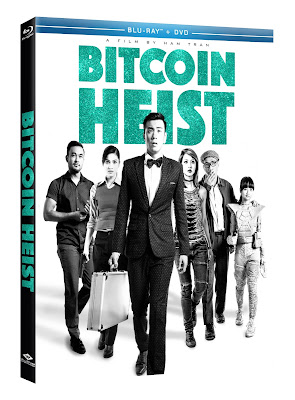 It’s been a while since I’ve had a chance to review a film that wasn’t a horror film. But when I first heard of “Bitcoin Heist”, the poster had the feel of a heist film in the vain of “Snatch” and one of the “Ocean Eleven” film. This is what sold me on this film as sometime poster art can make interested in a film.

The film follows an Interpol agent who is looking for the cyber-criminal known as the ghost. He’s been laundering money and turning them into bitcoins. To stop them, she enlisted a team of criminals to stop his ultimate heist. But there’s an old saying, there’s no honor among thieves.

It’s been a while since I’ve seen a foreign film that I had a fun time with. There have been some that were great but didn’t have that fun feel to it due to the tone of the film that I was seeing. “Bitcoin Heist” was a fun and thrilling ride from start to finish.

Writer/director Ham Tran does a very good job with the film’s action and pace. He makes sure the film has an Edgar Wright / Guy Ritchie look with the way that he directs the action and how he approaches some of the film’s scenes. It made this entertaining as it made me interested with the material. The other thing that I liked was the way that Tran does a very good job making the performances are very good. I liked how spend the time making sure each of his actors and actresses have chemistry with each other. It made the performances work well on screen. This helped make this film and its story fun which a film like this is supposed to do.

The other thing that was very good was its screenplay as it had a quirky and thrilling tone to it. Tran does a very good job making sure the action had a fun feel to it. Whether it was the way it was constructed in the screenwriting process to making sure it made sense with the story, Tran makes sure that it’s incorporated well with the film’s story. It made this different from other foreign action film. The other thing that the screenplay does very well is to develop the characters during the course of the film. You have a lot of films with lots of action, but you need characters to make the story have a purpose. This film does this very well as I was interested in each of the characters throughout the whole film.

It’s been a while since I’ve caught a foreign action film that had the feel of the fun thrill ride. “Bitcoin Heist was that and more as it was a fun two hours. If you like films like “Ocean’s Eleven” and “Now You See Me” that you will have a fun time with this film.