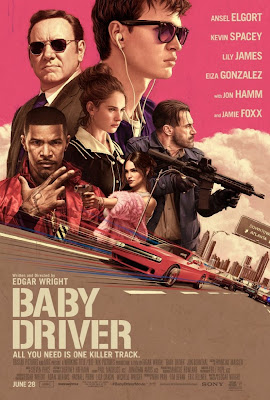 The new action-comedy from writer/director Edgar Wright. It stars Ansel Elgort as a young and extremely talented getaway driver, that's blackmailed into working for a team of professional bank robbers. The movie also stars Lily James, Kevin Spacey, Jon Hamm, Jamie Foxx, Eiza Gonzalez, Jon Bernthal and Flea. It's received nearly unanimous positive reviews from critics so far (it's currently 98% positive on Rottentomatoes), and it's also received nearly unanimous positive reviews from viewers as well. I agree with everyone else, it's one of the year's very best films!

Baby (Elgort) was in a horrible car accident as a child, which killed both his parents and gave him tinnitus for the rest of his life. He blocks the illness out by constantly listening to music now, which also makes him extremely skilled at things like driving. When a bank robber kingpin, named Doc (Spacey), caught Baby stealing from him (when he was younger), he blackmailed him into being his most skilled getaway driver (on every heist). After Baby pays Doc back though, everything he owed him, he wants out of his life of crime now. He's also met a young woman (James) he really likes, who also likes him a lot as well. Doc won't let his best, and most reliable, driver leave him that easily though.

The movie is extremely well written; it's full of great character development and witty dialogue. It's actually reminiscent of a Tarantino movie in that way, but with Wright's uniquely talented touch too obviously. The characters are all well cast as well, and the action scenes are breathless. There's multiple fully exhilarating car chases in it, and there's also an awesome foot chase scene too (that's inspired by one of Wright's favorite films, 'POINT BREAK'). The soundtrack is also equally cool, and it's always fittingly placed (in a stunningly beautiful way). The movie is a classic waiting to happen, in every way, and it's also one of Wright's best films (and the year's)!
at 7:36 PM
Labels: Ansel Elgort, Baby Driver, Edgar Wright, Jamie Foxx, Jon Hamm, Kevin Spacey, Lily James, Reviews, Sony Pictures