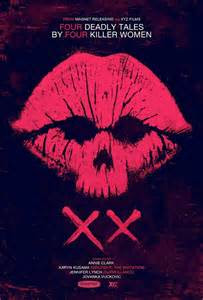 An anthology horror flick written, directed by and starring all women. The filmmakers include Roxanne Benjamin (who also wrote and directed a segment of the 2015 anthology horror film 'SOUTHBOUND'), Karyn Kusama (who's also helmed other female lead films like 2000's 'GIRLFIGHT', 2005's 'AEON FLUX' and 2007's 'JENNIFER'S BODY') and first time filmmakers St. Vincent and Jovanka Vuckovic. The women also wrote the screenplays for each of their short films; Benjamin also co-wrote a short with Vincent as well, and one segment is based on a short story by Jack Ketchum. The movie has received mostly positive reviews from critics, and it was given a limited theatrical release in indie theaters (and on video-on-demand). I really enjoyed it too.

The anthology is broken into four different short films, all intercut with stop motion animation sequences that feature a walking doll house (the animated segments were directed by Soffia Carrillo). The fist short involves a mother dealing with children that continuously refuse to eat anything, it's titled 'The Box. The second short is titled 'The Birthday Party', and it's about a mother trying to hide her husband's unexpected dead body from her daughter at her birthday party. The third short is about four friends on an expedition in the desert, that encounter a violent creature. It's called 'Don't Fall'. The forth short film is about a single mother dealing with a rebellious 18-year-old son, who's real father might be something very sinister. It's called 'Her Only Living Son'.

The movie is very dark, creepy and disturbing; everything a horror movie fan should want in a horror film. I love the fact that it's all written and directed by women too, and each short film also features a woman lead character as well. I think it's a very positive thing for women to keep doing more and more in film, and continuously break stereotypes. Anyone who thinks women can't direct good horror (or action) movies is completely wrong, and this film is proof of that. It's a really well made and memorable anthology horror flick, any true fan of the genre should be more than pleased with it.
at 9:34 PM
Labels: Magnet Releasing, Reviews, XX