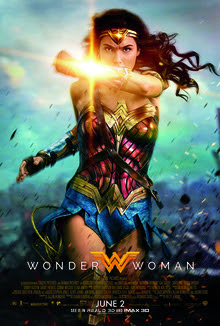 The new superhero film based on the classic DC Comics character (of the same name), and the fourth movie in the DC Extended Universe. It's an origin story starring Gal Gadot as the titular character (a role she previously played in last year's 'BATMAN V SUPERMAN: DAWN OF JUSTICE'). In this film she's an Amazon princess (in the year 1918) that aids an American pilot who crash lands on her home island of Themyscira (a place only inhabited by Amazonian women). She helps him try to stop the German Empire, from conquering the world during World War I, and she must leave her home for the first time in order to do so; by traveling with the pilot to London (where she becomes Wonder Woman for the first time). The film costars Chris Pine, Connie Nielson, Robin Wright, David Thewlis, Danny Huston and Elena Anaya. It was directed by Patty Jenkins (who also helmed the 2003 critically acclaimed female serial killer flick 'MONSTER') and it was written by Allan Heinberg, Zack Snyder (who also co-produced the movie) and Jason Fuchs. The blockbuster was made on a budget of $149 million, and it's the first summer tent pole superhero film directed by a woman. It's also received nearly unanimous rave reviews from critics, it was voted the most anticipated summer blockbuster of 2017 as well (in a recent pole), and it's exceeded all expectations at the Box Office (including becoming the biggest opening weekend ever for a film directed by a woman). I think it's one of the best superhero movies ever made.

The story begins in modern day, with Wonder Woman (Gadot) recollecting on her past as a young Amazonian princess named Diana (Emily Carey). Diana is taught to be a powerful warrior, in case the God of War ever returns to the hidden island they live on. A United States Army Air Service Captain, named Steve Trevor (Pine), crash lands on their island and is being pursued by German military forces. After stopping the attacking soldiers, the Amazonian people interrogate Steve. They then learn about the war, and the threat it poses to the entire planet. Diana feels that it's her duty to go with Steve, and defeat the God of War (if she can find him).

The film is a heck of a lot of fun; it's action-packed and the 'fish out of water' comedy scenes are hilariously classic (they're really well done). The movie is also surprisingly emotional, I even cried a little towards the end of the film. They couldn't have found a better director than Jenkins to direct this movie too. She really knows the character well, and she has a lot of passion for telling her story obviously. They couldn't have cast a better actress than Gadot in the title role either. She's perfect as Wonder Woman, and I think she gives the best performance of the year (so far). She's definitely a huge movie star waiting to happen; she's breathtakingly gorgeous and amazingly talented as well. I'm amazed at how much I actually love this film (I wasn't even excited to see it until recently too). It really blew me away, and I'm really happy with the progress it's helped advance for women in film!
at 10:03 PM
Labels: Chris Pine, Gal Gadot, Reviews, Warner Brothers, Wonder Woman