"The Mummy" Review by Tim Hellman 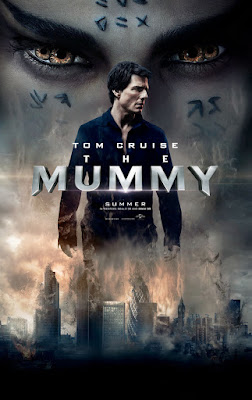 'THE MUMMY': Three Stars (Out of Five)

A reboot to the classic 'THE MUMMY' franchise, and the first installment in Universal Pictures' new Dark Universe series (with plans to reboot multiple other classic 'monster movie' franchises as well). This film has Tom Cruise battling an evil ancient princess, that he awakens from her mummified state (buried beneath the desert in a crypt). The movie also stars Sofia Boutella, Annabelle Wallis, Jake Johnson and Russell Crowe. It was directed and co-produced by Alex Kurtzman (who also co-wrote 'MISSION IMPOSSIBLE III', also starring Cruise) and it was written by David Koepp, Dylan Kussman and Christopher McQuarrie (who's also worked with Cruise multiple times before). The film has received mostly negative reviews from critics, and it's also underperformed at the domestic Box Office. I'm pretty disappointed with it as well.

Two American soldiers (Cruise and Johnson), serving time in Iraq, unwittingly unearth an ancient princess (Boutella), buried beneath the Iraqi desert in a crypt (by calling in an airstrike). They're then assigned to assist an archaeologist (Wallis), that one of them previously had an affair with, investigate the newly discovered crypt. While investigating it, they also awaken the mummified princess (of course). The soldiers are also then cursed by the evil mummy, and then forced into an otherworldly adventure like nothing they've ever been through before.

The film has some decent effects in it, and a few cool mummy fight scenes. Cruise is also (like usual) a great action hero in it as well. Other than that though, the movie is mostly forgettable. I love monster flicks too, so I really wanted to like it. There are definitely a few thrills here and there, but they're mostly forgettable. I hope the next Dark Universe film is a lot better than this one, that's for sure.
at 3:20 PM
Labels: Reviews, Russel Crowe, The Mummy, Tom Cruise, Universal Pictures