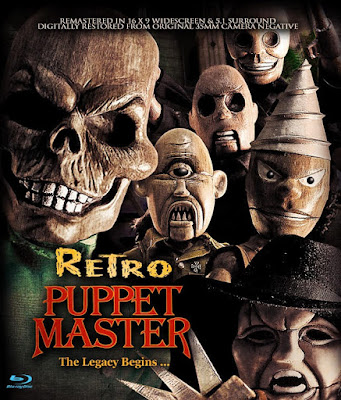 The film focuses on a young Andre Toulon (Greg Sestero) who is running his puppet shows with the help of his friends. During one of his shows, he meets the daughter of a Swiss diplomat whom he falls for. His life is turned upside down when a mysterious sorcerer on the run shows up on his doorstep with the ancient secrets of Sutekh. Now with the secrets, Toulon and his puppets must stop Sutekh and his servants before he carries out his evil plans.

It’s been a while since I’ve seen “Retro Puppet Master”. I remember first seeing this on DVD through the local video and feeling happy that it was better than the abysmal “Curse of the Puppet Master” where I was outraged at that film’s lazy attempt at making a horror film. This film holds up from the last time I saw it.

One of the reason that I enjoyed this was David Decoteau’s direction. He does a good job making sure this feels different from all the other Puppet Master films. Decoteau does that by making sure the dialogue scenes move at a good pace and not rely heavily on stock film like the sixth Puppet Master” did. It made this entry more enjoyable as it felt like a real film and something that would fit the crazy mythology. I also liked how the film’s villains also had a nice creepy look to them. Even though they feel practical and cheap, it has a nice zombie/ creepy “Dark City” vibe to them. Decoteau also did a good job making sure the acting is good here. I liked how he manages to make sure the performances have a different feel from previous films. It’s more low-key but effective as I was into them.

The screenplay written by Benjamin Carr was good. What I liked about this screenplay was that it had a different tone compared to the other films. The other films felt it had more of a horror tone to them with the way its focuses on the blood. This film however focuses more on the backstory of the series main character Andre Toulon and how he met his wife. It was a nice change of the pace from the first six films. The other thing that I liked about it was the fact that we got to the beginning years of Toulon and how he acquired the magic to make the puppet walk and kill. It gives more background information of the character. It’s nice to have a different kind of “Puppet Master” film considering the sixth one really sucked. The extras on the blu-ray starts off with the film’s commentary track featuring director David Decoteau and the film star Greg Setero. This was a very good one. I liked how the both of them do into detail about the making of the film and stories that had happened on set. It’s one of the better full moon commentaries that they’ve done. The disc then wraps up with the film’s original videozone and two hours of raw behind the scenes footage with or without commentary from David Decoteau.

Review Rating: Three and a Half stars