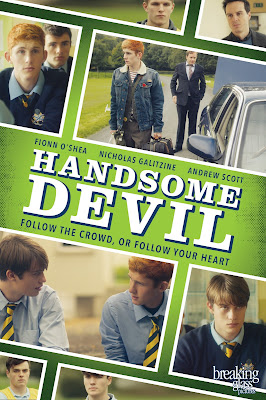 'HANDSOME DEVIL': Four and a Half Stars (Out of Five)

An Irish coming-of-age drama film, about an outcast and an athlete that are forced to share the same bedroom at their boarding school. They of course bond in the process. The movie was written and directed by John Butler. It stars Fionn O'Shea, Nicholas Galitzine, Andrew Scott, Moe Dunford and Michael McElhatton. Being an outcast myself, all of my life, I enjoyed the film quite a bit.

Ned (O'Shea) is a gay outcast that's forced to attend a new boarding school. Conor (Galitzine) was a star rugby athlete, at his old school (who got into too many fights there), and he's now forced to attend the same school. The two are also forced to share the same bedroom together, and they both immediately hate the idea. Over time they bond though, and they even form a two member band together. This doesn't go over well with some of the authorities though, at the rugby obsessed school, and their new friendship is tested.

This is a movie I hadn't heard anything about before seeing it. Then my friend asked me if I wanted to review it, for his website Film-Arcade.net. So after reading about it on IMDB, I said yeah. He sent me the screener, and I was very pleasantly surprised by it. It's a really touching coming-of-age tale, about being an outcast and not fitting in. This film is more specifically about being gay, but it could be about anyone that doesn't fit in (to the social norm) and it would still have the same message. I've been bullied my whole life, for being different (and more specifically for looking different). So many people have socially rejected me for this that it's really caused some serious emotional (and mental) issues. So this movie really spoke to me. I loved it!
at 8:05 PM
Labels: Breaking Glass Pictures, Handsome Devil, Reviews