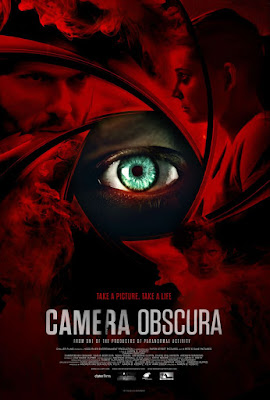 An indie horror flick about a veteran war photographer with PTSD, that sees future deaths in the photos that he takes (on a vintage World War II era camera). It was directed by first time feature filmmaker Aaron B. Koontz, and it was written by Koontz and Cameron Burns (Koontz and Burns also served as producers on the film). The movie stars Charlie Denham, Nadja Bobyleva, Catherine Curtin, Chase Williamson and Noah Segan. It's a very creepy and disturbing little indie horror flick.

Jack Zeller (Denham) is a professional photographer, and war veteran, who's dealing with some severe mental issues (due to his time in Afghanistan). To help him get through these mental problems, his fiance, Claire (Bobyleva), buys him a vintage camera at a work auction. She then gets him a job taking photos for the real estate company she works for. When Jack gets the photos developed though, he starts to see images of future deaths in them. When those deaths start to become a reality, Jack becomes even more mentally unstable as he tries to figure out what to do about them.

The movie is extremely creepy, and it only gets creepier as it goes on. Denham gives a great performance in the lead, and he really makes you feel what it's like to go mad. You keep wanting the character to stop doing the things he's doing, as a result of his madness, but he keeps doing them anyway. It's a really disturbing and fucked up movie! Very effectively directed, and written, by Koontz and Burns. If you're a fan of fucked up horror flicks, you should definitely give this one a try.
at 8:07 PM
Labels: Camera Obscura, Chiller Films, Reviews