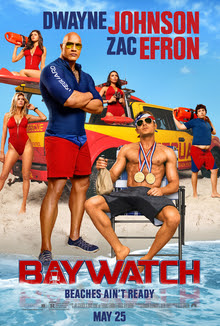 'BAYWATCH': Four Stars (Out of Five)

A satirical feature film adaptation of the 80s cult classic TV show, of the same name, starring David Hasselfhoff (who also has a cameo in this movie, along with his TV costar Pamela Anderson). The film stars Dwayne 'The Rock' Johnson, Zac Efron, Priyanka Chopra, Alexandra Daddario, Kelly Rohrbach, Jon Bass and Ilfenesh Hadera. It was directed by Seth Gordon (who also helmed 2011's 'HORRIBLE BOSSES' and 2013's 'IDENTITY THIEF') and it was written by Damian Shannon, Mark Swift, Jay Scherick, David Ronn, Thomas Lennon and Robert Ben Garant (Lennon and Garant are of 'RENON 911!' fame). In the film Johnson plays the self righteous leader of a special team of lifeguards, which fight crime on the beaches of Emerald Bay, Florida. A disgraced former Olympian (Efron) is added to the team to help with PR, while the lifeguards try to take on a corrupt business woman who might be smuggling drugs. The movie has received mostly bad reviews from critics, and it's also disappointed at the Box Office so far. I found it to be much better made, and more entertaining, than the critics have given it credit for!

Lt. Mitch Buchannon (Johnson) thinks way too highly of himself, and his job as a lifeguard, and he often upsets the local authorities, and his captain (Ron Huebel), by investigating crimes he has no jurisdiction over. So when Mitch finds a bag of drugs on his beach, and suspects a local business woman (Chopra) is to blame for it, he gets himself, and his team of lifeguards, in a lot of trouble trying to prove his suspicions correct. At the same time Mitch also has to deal with three new recruits to his lifeguard team, including a cocky ex-Olympic athlete named Matt Brody (Efron). Brody and Buchannon's enormous egos both continue to battle each other, while they also try to keep their beach safe.

The movie is surprisingly entertaining; it's consistently funny and the action scenes are pretty slick and exciting too. Going into the film expecting it to be a bad movie, I'm sure helped it's enjoyment level for me as well. I think The Rock and Efron are both great in the film, and they also have pretty good chemistry together as well. Chopra makes a great femme fatale villain in it too, and Bass is pretty funny also. It's just an all around amusing and fun time at the movies, and it's much better than the TV show it's parodying as well.
at 8:01 PM
Labels: Alexandra Daddario, Baywatch, Dwayne Johnson, Paramount Pictures, Reviews, Zac Efron