"47 Meters Down" Review by Tim Hellman 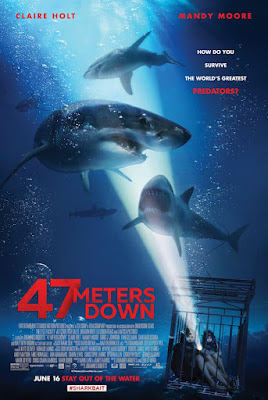 Another killer shark horror flick, this one stars Mandy Moore and Claire Holt. The two actresses play sisters vacationing in Mexico, that run into some horrendous trouble when they decide to go cage diving for sharks. It was directed by Johannes Roberts and it was scripted by Roberts and Ernest Riera (the duo also performed the same duties on the 2016 supernatural thriller 'THE OTHER SIDE OF THE DOOR'). The film costars Matthew Modine, Chris J. Johnson, Yani Gellman and Santiago Segura. It's received mostly positive reviews from critics and it's over-performed at the Box Office so far (it's done especially well considering it was almost released directly to video). Despite it's success, it still feels like a direct to video movie to me.

Lisa (Moore) and Kate (Holt) are two sisters vacationing in Mexico. Lisa was recently dumped, and Kate wants to show her a good time to make her feel better. They meet two guys at a bar, while partying late one night, that convince them to go diving for sharks the next day (despite Lisa having serious doubts about it). When they go diving, and the boat winch breaks (dropping them to the seafloor at 47 meters), it of course turns out that Lisa was right to be worried.

For a horror flick/shark thriller, the movie is just not very frightening or gruesome. I was bored most of the film, and I could barely stay awake for some of it (although it's true that I hadn't gotten much sleep the two nights before seeing it). Still, I had hoped for a lot more from this movie, and I was excited to see Mandy Moore in a shark horror flick too; I don't really know who Claire Holt is, she's cute but her role in this doesn't really demand much from her. The character development is also really weak; the film starts to develop the two sister characters at the beginning of the film, and then there's absolutely no resolve at the end of it. It's a bad B-movie, with somewhat decent production values though.
at 10:12 PM
Labels: 47 Meters Dowm. Mandy Moore, Claire Holt, Entertainment Studios, Reviews