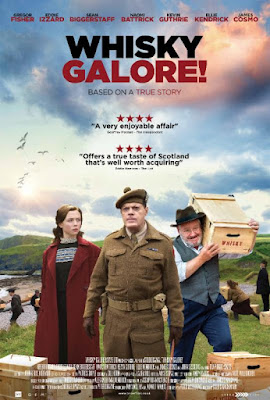 'WHISKY GALORE': Three and a Half Stars (Out of Five)

A British World War II comedy, that's based on the 1949 film of the same name. The movie tells the story of a group of Scottish islanders, on the Isle of Todday, that attempt to steal 50,000 cases of whiskey from a ship stranded offshore. It's set during the 1940s, when whiskey rationing was in effect. The film stars Gregor Fisher, Eddie Izzard, Sean Biggerstaff and Naomi Battrick. It was directed by Gillies MacKinnon and it was written by Peter McDougall (a veteran TV writer). The film has received mostly positive reviews from the critics that have reviewed it. I enjoyed it as well.

The story is set in 1941, and it's loosely based on true events. The Scottish islanders living on the Isle of Todday were suffering from severe whisky shortage (due to the rationing that was in effect during World War II). When they hear about a ship stranded on the rocks just offshore, called the SS Cabinet, that was carrying 50,000 cases of Scotch whiskey to America, they decide the opportunity to steal the whiskey is just too good to pass up. They're only problem is a Home Guard officer, named Captain Wagget (Izzard), who is determined to maintain law and order on the island.

The movie is funny and extremely upbeat; even given the subject matter of theft on a grand scale (and in reality a large amount of money was stolen from the ship as well). It reminds me of a lot of other Scottish and Irish islander comedies I've seen (like 'WAKING NED DEVINE'). If you enjoy that type of film, you'll probably get a good kick out of this. I think it's a well made and enjoyable movie, but it's also nothing too memorable though.