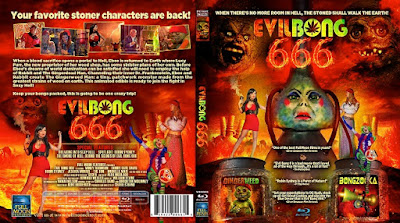 Full Moon Features recently send us over information for the upcoming DVD and Blu-Ray release of "Evil Bong 666". The film marks for the first entry in the Evil Bong franchise to be released on the Blu-Ray format.

Special features on the DVD & Blu-Ray includes "Blending into Sexy Hell", "Spotlight: Robin Sydney" and "The Smoke of Hell: Behind the Scenes on Evil Bong 666"

Full Moon is excited to announce the Blu-ray and DVD release of the sixth and wildest entry in their popular weed horror/comedy franchise: EVIL BONG 666! The film is already playing on the Full Moon Amazon channel and Full Moon Streaming plus other digital platforms and will finally exhale onto Blu-ray and DVD on June 1st!

Synopsis: The bong is BACK! Back from Hell, that is! Everyone’s favorite iconic and evil bong, Eebee, returns in the new, hellaciously dark Full Moon fantasy comedy. This time, she’s brought sexy demons, stoner creatures, and a brand new, freakish Full Moon puppet you’ll have to see to believe! When a brutal blood sacrifice opens a portal to Hell, Eebee and The Gingerdead Man are returned to Earth. But his trip to Hell has driven Gingerdead even more insane, and unless someone can stop his murderous cookie-cuttin’ rampage he’s gonna ruin Eebee’s plans for world domination. In a last-minute fit of inspiration Eebee channels her inner Dr. Frankenstein and creates The Gingerweed Man: a tiny, cobbled together monster made from the greatest strains of weed on earth. This little killer is ready to get high with a little help from his friends!
at 5:41 PM
Labels: Charles Band, DVD/Blu-Ray News, Evil Bong 666, Full Moon Features