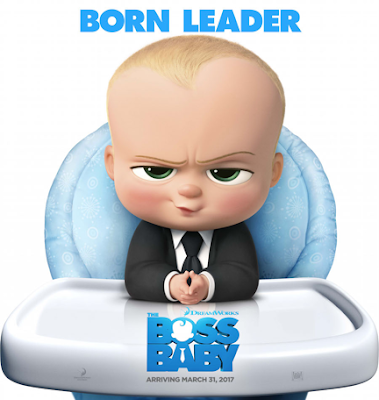 'THE BOSS BABY': Two and a Half Stars (Out of Five)

A computer-animated kids' flick, based on the 2010 picture book, of the same name, by Marla Frazee. It tells the story of a seven-year-old boy that's introduced to a new baby brother, only to learn that the baby is a secret agent, voiced by Alec Baldwin, that's leading a war against puppies. It costars the voices of Miles Christopher Bakshi, Tobey Maguire, Steve Buscemi, Jimmy Kimmel and Lisa Kudrow. The film was directed by Tom McGrath (who also co-directed the first three 'MADAGASCAR' movies) and it was scripted by Michael McCullers (who also co-scripted two 'AUSTIN POWERS' movies, and wrote and directed 'BABY MAMA'). It's gotten mixed reviews from critics, but it's also a huge hit at the Box Office. I found it to be about average for a silly animated kids' movie.

Timothy Templeton, as an adult (Maguire), tells a story about when he was seven-years-old (Bakshi) and first introduced to his baby brother (Baldwin). Tim is immediately jealous of all the attention his new brother steals away from him. He's also suspicious of some really strange activity; like the fact that the baby wears a suit and carries a briefcase. He later learns that his brother is trying to lead a war against puppies, with the other babies in town. Tim tries to convince his parents (Kimmel and Kudrow) this, but they're convinced he just has a very active imagination (which he obviously does).

The movie is creative and somewhat imaginative, and I like the way the filmmakers tell it's story. Right away I got the sense that it's all symbolism for how a child deals with accepting a new baby brother. You of course have to watch it all the way till the end though, to know for sure. The jokes are all aimed at kids unfortunately though, and they're all extremely silly. So other than the creative storytelling, the movie doesn't have a lot to offer adults. Which is fine, it's still a decent kids' movie but nothing more.
at 8:40 PM
Labels: 20th Century Fox, Alec Baldwin, Dreamworks Animation, News, Reviews, Steve Buscemi, The Boss Baby