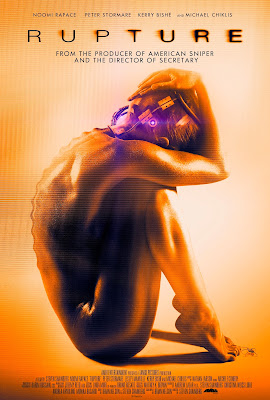 “Rupture” is a film that gained my interest when I heard about it because of the cast involved and the fact that Steve Shainberg directed this film. Yes, the same person who was behind “Secretary” back in 2002. Since then, he’s only directed one other film until now with this film.

The film is about a single mother (Noomi Rapace) who is looking forward to a weekend getaway with her boyfriend. Her plans takes a drastic turn when she is abducted by a mysterious group. There, she finds out that she is part of an experiment involving genetic abnormalities that might out her out as an alien. Can she find a way out of this horrific experiment before it’s too late? The film also stars Peter Stormare, Kerry Bishe and Michael Chiklis.

I really was hoping that I was going to like “Rupture”. The concept seemed interesting enough that I thought I would enjoy this and the fact that I like these cerebral type of horror/sci-fi film. Sadly, I didn’t enjoyed this film as I thought that this film was boring and predictable from start to finish. One of the things that made it hard to sit through was Steve Shainberg directing. The directing made this film one of those films where I wanted to do something else than watch this film. What made his directing bad was the fact the scenes were moving very slowly. I know it didn’t help that he had a bad screenplay and the tone of the film is very dark, but the scenes looked dull and direction looked lifeless. This also showed in the performance aspects as well. Shainberg doesn’t make any of his cast standout as he makes sure that everyone was delivering there lines in a tone that had one note to it. It made me bored watching the performances as everyone felt the same.

The screenplay was very worse than the direction. Brain Nelson’s screenplay felt like it was lacking a lot of things. First, I thought the beginning was completely rushed. When I like watching films of this nature, I like to get to know the characters. I didn’t here as I felt the introduction of the main character was rushed. It’s like Nelson spends ten minutes to get to know this character then rush to the main part of the film. When you’re rushing an introduction like this film did, it’s hard to get behind the main character. Second, the action in this film was boring. Nelson doesn’t make sure it had a punch to it. Instead, he makes sure that it matches the film’s tone. When you do that, you’re watching a film without any suspense and makes it feel like you’re wasting your time when you can do other things. But what I hate about this screenplay the most was the fact that it plays one note throughout. I like dark and dreary movies but when the screenwriter is playing one note throughout, it makes for a film that you wished you never seen. I was sitting and waiting for this film to end, as the action felt repetitive and didn’t care about any of the characters. He does nothing to make anything entertaining as it crashes a third of the way in and I couldn’t wait for this to be over as I had a feeling what the ending is going to be.

I thought I was going to be in for a good film with the talent involved, but instead this is one of the worst I’ve seen all year as “Rupture” implodes before it ends.