"Guardians of the Galaxy Vol 2" Review by Tim Hellman 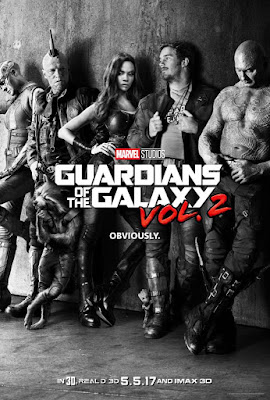 'GUARDIANS OF THE GALAXY VOL. 2': Five Stars (Out of Five)

The highly anticipated sequel to the blockbuster 2014 superhero flick 'GUARDIANS OF THE GALAXY', based on the Marvel comic book of the same name. The film is once again written and directed by James Gunn, and all of the original's starring cast return as well; including Chris Pratt, Zoe Saldana, Dave Bautista, Michael Rooker, Karen Gillan, Sean Gunn, and the voices of Bradley Cooper and Vin Diesel. They're joined this time around by Kurt Russell, Elizabeth Debicki, Pom Kelmentieff, Chris Sullivan and Sylvester Stallone. The story this time deals with the Guardians helping Peter Quill learn more about his father, who he meets for the first time. The movie has received mostly positive reviews from critics (just like the first) and it's a blockbuster at the Box Office so far as well (just like the first). I loved it.

The story begins in 2014, when Peter Quill, also known as Star-Lord (Pratt), and his friends, are now all well known (across the cosmos) as 'The Guardians of the Galaxy'. They're hired by the Sovereign race to protect valuable batteries from a giant space monster. In exchange they're given Gamora's (Saldana) sister Nebula (Gillan); who was trying to steal the batteries for herself. Upon leaving, Rocket (Cooper) also steals some of the batteries, for no apparent reason, and the Sovereign race hunt the Guardians down for it. They crash on a planet close by, after being rescued by Peter's father Ego (Russell). The Guardians then help Quill get to know his dad, for the first time. Things are not all as they seem though.

The movie is once again full of colorful characters and visuals. It's also full of witty jokes, decent performances (which are all very well cast once again), exciting action scenes, and an awesome soundtrack (featuring Brandy, by the Looking Glass, which is a karaoke song I've done hundreds of times before). The film, this time around, is not quite as original, creative, action-packed or as hilarious as the original though; it does all of those things well, but just not quite as well as the first film. It is once again filled with great character development though (including a lot of psychology and family drama), and very touching dramatic scenes; this is where this sequel actually outdoes the original (I cried more times in this movie than in it's predecessor). Gunn gives it his all once again, and he definitely delivers (it is a near perfect film). When the original is as classic as it is though, it's almost impossible to top the second time around. I still give the movie 5 stars though, and it is one of the very best films so far this year (that's for sure).
at 7:38 PM
Labels: Bradley Cooper, Chris Pratt, Dave Bautista, Guardians of the Galaxy Vol 2, Karen Gillan, Kurt Russell, Marvel Studios, Michael Rooker, Reviews, Vin Diesel, Zoe Saldana