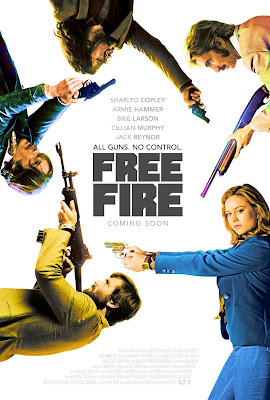 The new British action-comedy flick from director Ben Wheatley; who also helmed 2011's 'KILL LIST' and 2016's 'HIGH-RISE'. It was written by Wheatley and Amy Jump; who also wrote 'HIGH-RISE' and co-wrote 'KILL LIST' (also with Wheatley). Brie Larson, Cillian Murphy, Sharlto Copley, Armie Hammer, Jack Reynor, Sam Riley, Michael Smiley and many others (including Patrick Bergen in a cameo appearance) star in the flick. The story revolves around two gangs that meet in an abandoned warehouse, in Boston in 1978, when a big shootout erupts between them. It's received mostly positive reviews from critics and fans alike. I absolutely loved it!

Two gangs, and an intermediate named Justine (Larson), meet at a Boston warehouse (in 1978). One gang is buying guns from the other, and even though the supplier brings the wrong guns, the deal seems to be going over smoothly. Then one gang member (Reynor) recognizes a rival gang member (Riley) as the guy who abused his cousin the night before. Tensions rise between the two men, and a shootout soon erupts between everyone. It then becomes every man (and woman) for him or herself, as a violent blood bath ensues.

The movie is action-packed; it's also equal parts exhilarating (and quite violent) action, and hilarious comedy. It's full of great character development, and entertaining performances too; I'd have a really hard time picking my favorite (probably Copley though). The film feels a lot like a Tarantino flick (especially, specifically 'RESERVOIR DOGS') but it's more fun than that. Despite how fun, and funny, it all is though, it's also full of very brutal and bloody violence as well. I had a complete blast. It's a totally awesome genre flick, that I had heard nothing about until a week before it came out (so it totally snuck up on me). I'm sure it will become a cult classic, so you should see it in the theater while you still can! It's the type of movie that fans will be wanting to see on the big screen again 12 to 20 years from now (for the twelfth or twentieth time); and they'll be cheering, laughing and quoting their favorite lines from it the whole time.
at 8:13 PM
Labels: A24, Armie Hammer, Brie Larson, Free Fire, Reviews, Sharlto Copley