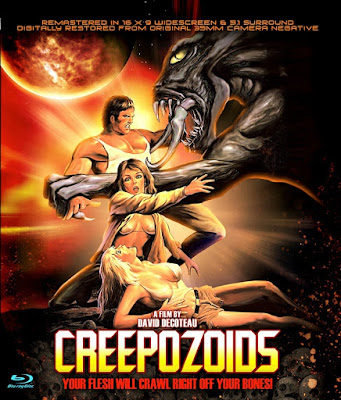 When I first discovered “Creepozoids”, I was looking into some Linnea Quigley work after liking her in films like “Night of the Demons” and “The Return of the Living Dead”. When I came across “Creepozoid”, I also noticed that it was David Decoteau who directed one of my favorite Full Moon films “Puppet Master 3: Toulon’s Revenge”. It was a no brainer to check this film out.

The film is about five people who deserted the army during a nuclear war. They come across an abandoned building to avoid the acid rain. They soon discover that they are not alone as there are mutant monsters lurking from every corner turning people into hideous creatures. Can they survive the storm before they become monsters themselves?

I enjoyed “Creepozoids” from start to finish. Decoteau’s direction was very good from start to finish. What makes his directing good was the way that he makes the action move at an intense pace. Whether it was the way that he makes sure the action has an intense feel to making sure this film has an energy to it, Decoteau makes sure the action is there to keep the film moving and keep you engaged with everything on screen. It helped made this a fun and intense film considering its budget. The other thing that makes his direction so good was the fact that the acting is good enough to keep you interested in the performances. He makes sure that his cast is making their performances good enough so that it makes you interested in the characters and the gory action that takes place. It helped with my enjoyment of the film, as it this was one of those fun 80’s B-movies.

The screenplay written by Decoteau and Buffalo Hauser was a fun one. One of the things that I liked about the screenplay was the fact that it builds up the suspense and terror. They made sure that they build up every intense scene. Whether it was through the false scares or making sure the creatures are terrifying, it was done in a way that it didn’t rushed. When that happens, it allows for good build up and development. The other thing I liked about this was the fact there was some good action sequences. The writers did a good job making sure that those scenes had an intense and gory feel to them. It gave that intense feel that I like seeing in low budget horror films where it makes you forget the cheap scenery.

If there was one thing that I didn’t like about this, it was the fact this film is short with its seventy-two minute running time. It was one of those films that I wished was a little longer because the running time flies by and like this film a lot. It’s the only complaint that I have with this film. The extras start off with the director’s commentary track from director David Decoteau. It’s a rarity for a Full Moon release to have one of these but it very welcomed here as there wasn’t any interviews on this disc. Decoteau does a good job going into the various facts about the production on this. It makes up for the lack of any interviews. After that, there’s rare production stills for the film and trailers for this film and other Full Moon releases. It was better than previous releases.

Creepozoids” was one of those films that I enjoyed a lot and made me want explore more of David Decoteau films as I would’ve never seen and enjoyed films like “Nightmare Sisters” and “Sorority Babes in the Slimeball Bowl-O-Rama” which also starred Linnea Quigley. “Creepozoids” is a fun an intense 80’s B movie that will creep you out.