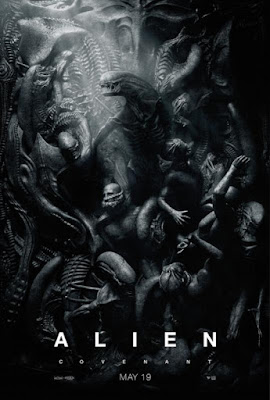 The sixth installment in the immensely popular 'ALIEN' franchise (the eighth counting two 'ALIEN VS. PREDATOR' movies), and the second chapter in series creator Ridley Scott's prequel series. Scott directed and co-produced the film, once again with the other two series creators David Giler and Walter Hill. The script was written by John Logan, Dante Harper, Jack Paglen and Michael Green. It stars Michael Fassbender (reprising his role from the previous film 'PROMETHEUS', and playing a new android role as well), Katherine Waterston, Danny McBride, Billy Crudup, Carmen Ejogo and Demian Bichir. James Franco, Noomi Rapace and Guy Pearce also have un-credited cameos in the movie (Rapace and Pearce also both reprise their roles from the previous film). It's received mostly positive reviews from critics, and it's been a hit at the Box Office so far as well (internationally). Like most of the other films in the franchise, I absolutely loved it!

The story is set in the year 2014, when the crew of the Covenant is headed for a remote planet called Origae-6. There are over 2,000 colonists onboard, plus thousands of embryos. An android named Walter (Fassbender), an updated version of David (from 'PROMETHEUS'), watches over the ship and everyone onboard (while they're all in stasis). When a shockwave hits the ship, Walter wakes the crew up early. While repairing damages done by the wave, the crew receives a human radio transmission from an unknown planet. The new captain, Christopher Oram (Crudup), decides they need to investigate it; against the objections of terraforming expert Daniels Branson (Waterston). Daniels is of course right to be concerned, and unknown xenomorphs might be involved.

Like 'PROMETHEUS', the film is full of very broad philosophical and religious ideas; and like all of the 'ALIEN' movies, and a lot of science fiction, it once again presents the idea that too much advancement in modern technology might lead to our downfall (the alien is never really the true enemy in any of these films). Unlike 'PROMETHEUS', and more like the other installments in the series, there's a lot of alien thrills and action though. It's kind of the perfect mix of violence and philosophy, and there's even some great Ripley-esque scenes in this one (and Waterson is fantastic in the role). I think fans of the series will be extremely pleased with this new chapter (as I am), and I'm eagerly looking forward to more new installments in the beloved series!
at 5:56 PM
Labels: 20th Century Fox, Alien: Covenant, Katherine Waterson, Michael Fassbender, News, Reviews, Ridley Scott