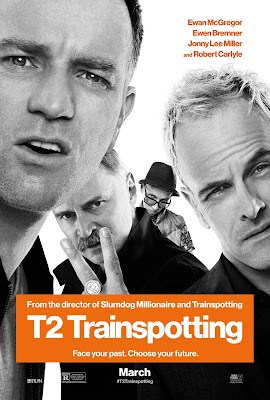 'T2 TRAINSPOTTING': Four and a Half Stars (Out of Five)

Director Danny Boyle's sequel to his beloved 1996 cult classic 'TRAINSPOTTING', reuniting all of the original cast members (more than 20-years later)! It was also once again scripted by John Hodge, and based on the books 'Trainspotting', and it's sequel 'Porno', by Irvine Welsh. The story revolves around Mark Renton returning to Edinburgh, and attempting to make amends with the friends he betrayed 20-years earlier (in the original film). It's filled with nostalgic clips from the original movie, serving as flashbacks, and Ewan McGregor, Johnny Lee Miller, Ewen Bremner and Robert Carlyle all reprise their roles. Kelly Macdonald returns for a cameo appearance, and Anjela Nedyalkova joins the cast. It's received mostly positive reviews from critics, and it's also been a hit at the international Box Office as well. I enjoyed it quite a bit.

After stealing the money Mark Renton and his friends stole together, 20-years earlier, Renton fled to Amsterdam with it, and he's been living there (unhappily) all of this time. He returns home to Edinburgh to try and make amends with those he betrayed, and he finds Spud (Bremner) still addicted to heroine and trying to commit suicide. Mark is able to stop him, and he then attempts to get Spud to quit drugs as well. Sick Boy (Miller) is now running his aunt's pub, while he's also addicted to cocaine, and blackmailing others with his Bulgarian girlfriend (Nedyalkova). He also still holds a big grudge against Mark, for stealing his money decades earlier. Begbie (Carlyle) holds the biggest grudge though, and he breaks out of prison wanting revenge.

I'm not a huge fan of the original film; I've only seen it once though (when it originally came out) and I don't really remember it that well. This sequel definitely refreshed my memory, through it's many flashback scenes. I have friends, and family, that love the first film though, and I'm sure they'd probably find this sequel to be very nostalgic, and possibly somewhat emotional. I was really moved by it, and (like I said) I'm not even an obsessive fan of it's predecessor. I'm sure the first film is probably better, but this sequel is still really well written, acted and directed. It's a really well made sequel, as far as sequels go (20-years later).
at 10:48 AM
Labels: Danny Boyle, Ewan McGregor, News, Reviews, Robert Carlyle, Sony Pictures, Trainspotting 2