"The Watchers" Set to Terrorize Your Home 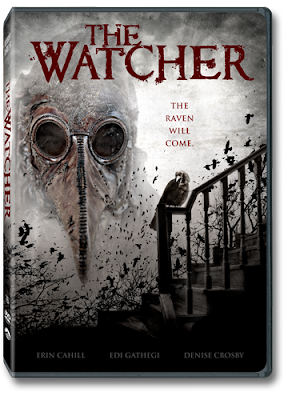 Monarch Home Entertainment recently send us over information for their upcoming DVD release of "The Watcher". The film stars Erin Cahill, Edi Gathegi and Denise Crosby.

Monarch Home Entertainment is set to release Ryan Rothmaier’s The Watcher! This indie horror thriller will debut on DVD, this month. Starring Erin Cahill, Edi Gathegi and Denise Crosby, The Watcher is a mysterious film, in which a young couple is terrorized in their new house, by a strange entity. The film was developed by MarVista Entertainment. Details on the home entertainment launch, of The Watcher, are hosted here.

The story is one of nightmares. Emma (Cahill) and Noah (Gathegi) have just purchased a large, new home. Some of their neighbors are eccentric. Even more disturbing, someone does not want them there and they are threatening the couple with strange notes. Events take a disturbing turn when a costumed figure is seen breaking-in and out of their house.