"The Fate of the Furious" Review by Tim Hellman 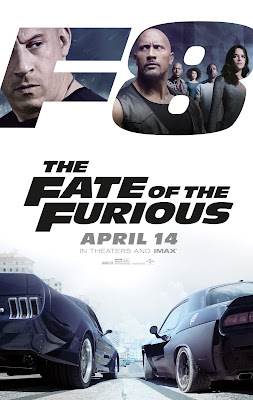 'THE FATE OF THE FURIOUS': Four Stars (Out of Five)

The eighth installment in the immensely popular blockbuster franchise, and only the second chapter not to include the late Paul Walker (following 2006's 'TOKYO DRIFT'). Vin Diesel, Dwayne Johnson, Jason Statham, Michelle Rodriguez, Tyrese Gibson, Chris Bridges, Nathalie Emmanuel and Kurt Russell all reprise their roles from the other films; while Charlize Theron, Scott Eastwood and Helen Mirren join the cast. F. Gary Gray (who's best know for helming 2015's 'STRAIGHT OUTTA COMPTON') directed this installment (he's also worked with Diesel before on 2003's 'MAN APART', and with Theron on 2003's 'THE ITALIAN JOB'). It was once again written by Chris Morgan, who also wrote the last 6 chapters in the series. The film is also (once again) a huge hit at the Box Office, and it's also gotten mostly positive reviews from critics as well (like all of the other recent installments in the series). I enjoyed it too.

Dom Torretto (Diesel) and Letty Ortiz (Rodriguez) are on their honeymoon in Havana, when Dom is approached by a cyberterrorist known as Cipher (Theron). She seduces him into working for her, by showing him a picture of something that's obviously very important to him. Dom then betrays his team, and steals an EMP device from them. Agent Frank Petty (Russell) then recruits Letty, Luke Hobbs (Johnson), Deckard Shaw (Statham) and the rest of Dom's team to help them catch Dom, and stop Cipher.

The movie is action-packed, but it's also way too long (at over 2 hours and 15 minutes). For me, it definitely starts to drag a little in the middle of the film. I wasn't a big fan of the series when it first started, but I've been really impressed with the last several installments, and I think this is one of the best ones yet. It's not as good as the last chapter in the series, because that was a really fitting (and quite beautiful) tribute to Paul Walker, but it might be the second best one yet. And I really respect how diverse a cast this franchise has always employed; it's probably the most diversely cast blockbuster franchise in cinema history (but 'STAR WARS' is catching up to it though).
at 7:51 PM
Labels: Charlize Theron, Dwayne Johnson, Jason Statham, Michelle Rodriguez, Reviews, The Fate of the Furious, Universal Pictures, Vin Diesel