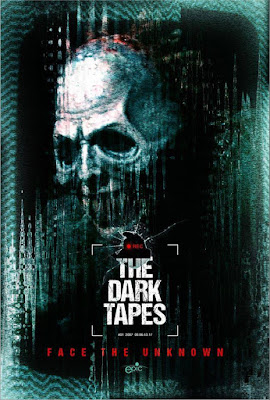 'THE DARK TAPES': Three and a Half Stars (Out of Five)

An indie anthology horror flick, which interlocks four different tales of creatures, demons, ghosts and other things in the paranormal world. The film runs 98 minutes long, and it was made on a budget of just $65,000. It also features an ensemble cast (of mostly unknown actors) lead by Cortney Palm. First time feature filmmakers Michael McQuown and Vincent J. Guastini directed and co-produced the flick. McQuown also wrote the script (he previously co-wrote 2005's 'THE PERFECT MAN') and he also served as the film's editor and cinematographer as well. I found it to be a mostly well made, and impressive little indie horror flick; highlighted by Cortney Palm's performance.

The movie contains four different chapters, each telling a different supernatural tale. One revolves around a couple experiencing paranormal activities in the house they recently moved in to. Another story tells the tale of two lesbian lovers, that make a living performing sexual activities online (for paying customers), and one begins blacking out and not remembering certain strange experiences. Another story involves a woman who's raped at a party, and she then becomes obsessed with stopping persistent unwanted paranormal intruders. A fourth story is intercut between the others, and it revolves around three paranormal investigators, that take their investigations into uncharted new dangerous territory.

The movie is a little too slow-paced, drawn-out, and a tad too over complicated in places. For a film made on just a $65,000 budget though, I think it's mostly impressive. I love indie horror flicks like this, especially well made anthologies. This one delivers some nice effects, some cool dark imagery, and some pretty clever twists; it just sometimes takes a little too long to get to them. The acting, with the exception of Palm, is pretty amateurish though. The film probably won't become a cult classic of any kind, but I think it's still definitely worth the rental price. I bought it on Amazon Video for $9.99, and I don't regret it.
at 8:24 PM
Labels: Epic Picture Group, Reviews, The Dark Tapes, Thunder Road Incorporated