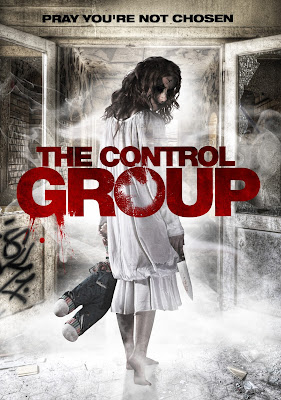 'THE CONTROL GROUP': Two and a Half Stars (Out of Five)

An indie sci-fi/horror flick about five abducted college students that are trapped in an abandoned insane asylum, as part of some crazy science experiment. The film stars Brad Dourif, Ross Destiche, Kodi Saint Angelo, Monique Candelaria, Justen Jones, Jerry G. Angelo, Shane Philip, and a bunch of other mostly unknown young actors. It was directed by first time filmmaker Peter Hurd, who also produced and co-wrote the movie (with first time feature screenwriter Logan Gion). The film is pretty cheesy and amateurish, but it's also not without it's moments.

Jack (Destiche) wakes up in an insane asylum, with no recollection of where he is or how he got there. Some friends of his come by, and they explain to him that they've all been abducted (and that nothing is as it seems). It appears they're apart of some disturbing psychological science experiment; and they begin to be slowly killed off, one by one, as part of the experiment. Jack tries to figure out what's going on, and who's behind everything, while he also struggles to keep his sanity.

The movie was made on a $1 million budget, and it shows, but despite it's low-budget productions values, I have to give it some credit for effort. It is mildly amusing, at times, and some of the young actors are good in it. Candelaria is also stunningly beautiful to watch, and she gets to play a cool tough action heroine in the film too. Dourif is also always a fun scene stealer to enjoy as well (for like five decades now). If you love movies, and especially indie horror flicks, I'd say this film is still worth watching (despite it's many flaws).
at 10:14 AM
Labels: Reviews, The Control Group, Wild Eye Releasing