"Ghost in the Shell" Review by Tim Hellman 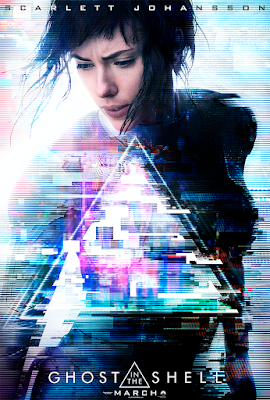 'GHOST IN THE SHELL': Four Stars (Out of Five)

A big budget American sci-fi action film, based on the popular Japanese manga, of the same name, by Masamune Shirow (which ran from 1991 to 1997). It stars Scarlett Johansson as a cyborg counter- terrorist commander, taking on hackers, cyber terrorists and other criminals (in a futuristic world). The movie also costars Pilou Asbaek (who also costarred with Johansson in the sci-fi action hit 'LUCY'), Michael Pitt, Takeshi Kitano, Juliette Binoche and Chin Han. It was directed by Rupert Sanders (who also helmed 2012's 'SNOW WHITE AND THE HUNTSMAN'), and it was written by Jamie Moss, William Wheeler and Ehren Kruger. The film has received mostly positive reviews from critics, but it's underperformed at the Box Office so far. It's also been heavily criticized for it's casting of Johansson as well, in an originally Asian role. I absolutely loved the film's visuals, but I definitely can't say I found the story that interesting or involving.

The Major (Johansson) is the cyborg head of a counter-cyber terrorist task force, known as Section 9. Her team catches and kills cyber criminals, and terrorists, in a future world that's becoming more and more machine. The Major is the ghost of a human, with a forgotten past, that functions in an almost entirely machine body. As she tries to defeat an unknown new threat, she also struggles to identify with who she really is.

The film is absolutely stunning to watch, but I could not find myself interested, or involved, in any of the characters or story, in the slightest, until the third act (but even then it was just a very slight interest). It seems like such a waste too, because the action, music and overall style of the movie is absolutely breathtaking to experience. In many ways it reminds me of classic sci-fi from yesteryear, but only on a purely visual level. It's practically the ultimate example of style over substance, and I'm sure the casting of an Asian actress, in the lead, would have benefited the film immensely as well.
at 5:28 PM
Labels: Ghost in the Shell, Paramount Pictures, Reviews, Scarlett Johansson