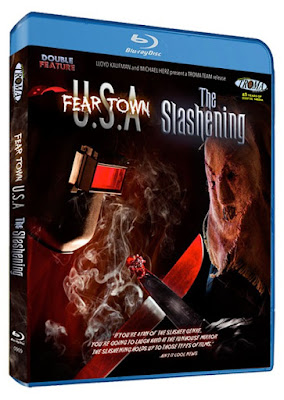 When I first heard about the “Fear Town U.S.A” and “The Slashening” being released as a double feature blu-ray, I was kind surprised since neither film has been release yet. But since this be released by Troma, I wanted to check this out because it sounded crazy enough that it might be good.

“Fear Town USA” is about a group of teens who are celebrating St.Blevins Day by parting the night away. By sinister things are happening on this night like a girl who is haunted by the spirit of her former classmate, a lonely teenager looking for a good time, a group of teens partying in the woods and an mental patient on the loose. This leads to pure terror and debauchery.

“Fear Town USA” was very funny film from start to finish. Director Brandon Basham does a very good job making sure the scenes move at a good pace through his direction of the action and comedy aspects. It had some very good laugh out loud moments and kept my interest in the action. He also does a good job making sure that his direction of the cast is good enough to make the funny moments work in the screenplay. Whether it’s the action scenes to how he makes sure that his cast is engaged with the material, everything is done to make sure that the performances look good on screen. It made some of the humor work. The screenplay written by Basham, Patrick Foy, Dan Kenkel, Samuel Narisi, Mark Vigeant and Reynard Alli does a very good job making sure that they balance both the horror and comedy aspects that this film has. It helped makes this film entertaining as the time moves along and there is funny material that works including a couple of laugh out loud moments. The other thing that this screenplay does well is to make sure that the stories interweave with each other and stay within the film’s main premise. It made the film entertaining and the separate stories in the film easy to follow.

“The Slashening” follows a group of best friends who spend the night throwing a party that includes fun, pizza and boys. But someone is stalking them, as they enjoy the night away. Now, they are forced to confront this person as he’s look to end the party and them.

“The Slashening” is the better of the two films on this double feature disc. One of the reasons why I feel this was it felt there was more horror to it instead of a film that was played for laughs like “Fear Town U.S.A”. Sure there is some humor here but this film was gorier and the fact that it felt more like a horror film than comedy with horror elements.

Director Brandon Basham does a very good job making some of the death scenes have a bloody feel to them while also injecting some funny humor in them. It helped make some of those scenes stand out including a montage of the film’s killer offing pizza delivery boys in succession. It’s something that usually would be so redundant but it was played for humor which made it work. The other thing that makes this very good was the cast here was better in this film. Each member of the cast does a very good job making sure there characters are interested through their various traits. It make them interesting and it made the humor work and interested in these characters.

Basham’s screenplay was also good here. He does a very good job making sure the kills are creative. Whether it’s the way that he adds humor to those scenes or making them feel very gory, it does a very good job in keeping you interested in this film. If this was the run of the mill slasher film, this wouldn’t work at all. Since its also being played for laughs, it works so well here. The other thing that the screenplay does very well is to not take itself serious with the stereotypical characters that you would see in these films. Basham does a very good job making sure each of the characters have an awkward tone to them. I personally liked it, as it helps make a low budget film like this feel so fun to watch.

There’s isn’t many extras on this disc considering this there are two feature length films on this disc. It starts off with the commentary track for “Fear Town U.S.A” featuring writer/director Brandon Bassham, writer/producer Reynard Alli, actress Dana Clinkman, writer/actor Patrick Foy and producer Al Holm. The commentary is good here. They do a good job going into the productions of the film and bring up some stories of what happened during filmmaking of this film. It makes of for a lack of a behind the scenes featurette.

After that, there is a short film “Radiation March” then trailers for “Return to Return to Nuke em’ High” and “Cannibals: The Musical”. I had a very good time with both of these film as this is a solid fun release from Troma Entertainmet. With its humor and craziness, both “Fear Town U.S.A.” and “The Slashening” are both bloody fun horror comedies that micro budget horror and Troma fans will have fun with.

“Fear Town U.S.A.” Film Review – Three and a Half Stars