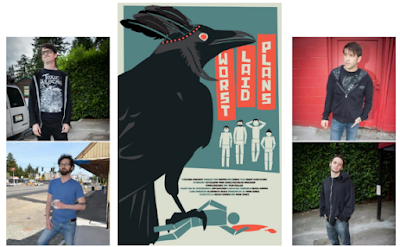 For more information on this film, you can visit the film's official website at: www.worstlaidplansmovie.com

Troma Entertainment, the longest running truly independent film company in American history, is proud to announce the acquisition of Mark Jones and CB Shamah's gut-busting, hilarious, one of a kind comedy Worst Laid Plans which is set to have its World Premiere on Troma Now April 1st, it was announced today by Lloyd Kaufman, President of Troma Entertainment and creator of The Toxic Avenger.

Ernie, Max and Nick are tattoo artists who, along with piercer Vit, own A-1 Tattoo. Ernie has the unfortunate task of letting the guys know that they are behind on their rent with no solution in sight. After being humiliated by their landlord, Max comes up with a plan and the guys are convinced it's the only way they're going to save their shop. The plan: scan the sex-for-pay ads, set up a meeting with the most perverted and rob them. As things start to spiral out of control, it's not just the plan but the guys' friendship that begins to unravel.

With their shop on the verge of closing, a landlord breathing down their necks and a corpse on their hands, Max, Ernie, Vit and Nick can't help but wonder: maybe they should never have become friends. And maybe, just maybe, they shouldn't be friends anymore.

After a lengthy sojourn traveling around the United States, working on sets and collecting experiences, CB Shamah settled in the Pacific NW attending the Seattle Film Institute with a focus on cinematography. Since then CB has shot a ton of live music, produced the web series "This Week at the Columbia City Theater", has camera credits for A Visitor In The Night, Measure Of Comfort and was Cinematographer/Producer for the feature Spree. CB also co-directed and co-produced the Emmy-nominated Welcome To Doe Bay and the live music documentary, Lemolo: A Beautiful Night.

Mark Jones began writing short stories, completing his first screenplay in his teens. After graduating from high school, he would go on to receive a BA in Creative Writing from Rowan University in Glassboro, NJ, then attended the Seattle Film Institute in Seattle, Washington. Upon graduation, Mark returned to his native New Jersey to direct and produce his horror-comedy screenplay, Spree. Spree screened at several festivals throughout 2007 and was picked up and distributed via Brain Damage Productions. Since that first feature, Mark has created, wrote and starred in the web series, This Week at Columbia City Theater. He was a cinematographer on the documentary Welcome to Doe Bay, and filmed and produced a reality television pilot titled The Shop, which is the influence for his latest screenplay, Worst Laid Plans.