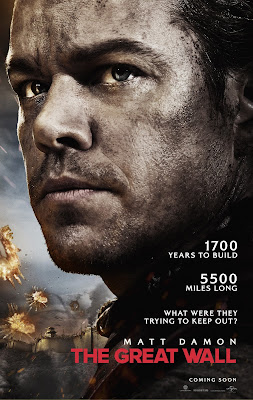 'THE GREAT WALL': Three and a Half Stars (Out of Five)

A big-budget historical fantasy from director Zhang Yimou; marking the first English-language film directed by the popular Chinese filmmaker (who's also helmed such beloved Chinese cinema classics as 2002's 'HERO' and 2004's 'HOUSE OF FLYING DAGGERS'). The movie stars Matt Damon, as a European mercenary that helps defenders of the Great Wall of China fight off ancient monsters (during the Song dynasty). It also costars Pedro Pascal, Jing Tian, Willem Dafoe and Andy Lau (who also costarred in 'HOUSE OF FLYING DAGGERS'). The film was written by a team of six writers (including filmmaker Edward Zwick), and it's been accused of whitewashing (by telling another white savior tale); Zwick also directed and co-wrote 'THE LAST SAMAURAI', which was also accused of white washing (for the same reason). It's been a hit at the international Box Office (so far), but it's also gotten mostly negative reviews from critics. I mostly enjoyed it, despite it's obvious flaws.

The story takes place in ancient China, during the Song dynasty, when a group of European mercenaries are searching for black powder there (just a few miles north of the Great Wall). After the team is attacked by bandits, and an unknown monster, only William (Damon) and Tovar (Pascal) remain alive. The two then come across the Great Wall, and are captured there. They soon learn that a military order, that defends the Wall, is preparing for an invasion from an army of the same kind of monster that attacked them. The military is later impressed by the duo's fighting abilities, and they enlist their help in their war. William and Tovar reluctantly agree to assist them, while also planning to rob them.

The movie is filled with pretty impressive action scenes, and beautifully stunning visuals (like all of Yimou's films). It definitely seems Americanized though, and I definitely sympathize with those that are offended by it. Still, it is entertaining (in a fun B-monster flick way), and somewhat funny. Damon, Pascal, Tian, Lau, Dafoe and the others are all good in the movie as well. It's just a shame they couldn't have cast an Asian actor in the lead.
at 11:24 AM
Labels: Matt Damon, Reviews, The Great Wall, Universal Pictures