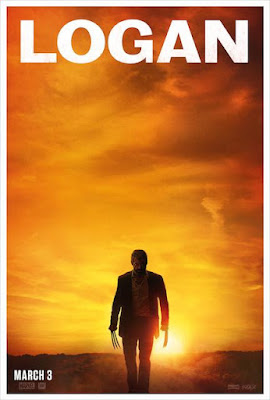 The third and final standalone Wolverine movie (and the 10th installment in the 'X-MEN' cinematic film universe); once again based on the popular Marvel Comics character, with Hugh Jackman reprising his most iconic role (for supposedly the last time). The film has an aging Wolverine traveling across a dystopian future America, in order to help a special young mutant girl. The movie also costars Patrick Stewart (reprising one of his two most iconic roles, once again, as Professor Xavier), Dafne Keen, Boyd Holbrook, Richard E. Grant and Stephen Merchant. It was directed by James Mangold (who also helmed 2013's 'THE WOLVERINE'), and it was written by Mangold, Scott Frank and Michael Green. The film has been a huge hit at the Box Office, so far, and it's received nearly unanimous positive reviews, from critics and fans alike. I enjoyed it as well.

The story is set in the year 2029, when mutants are almost entirely extinct. Logan (Jackman) is now aging like a human does, due to the fact that his adamantium skeleton is now poisoning his body (and it's stopped healing him as well). He's now working as a chauffeur driver, in Texas, and helping to take care of Professor Charles Xavier (Stewart); who's suffering from a disease which causes him to lose control of his telepathic abilities. Logan is approached by a nurse (Elizabeth Rodriguez), who wants him to help transport an 11-year-old girl (Keen), with very special powers, to a place in North Dakota. Logan reluctantly agrees.

The movie is surprisingly dark, and extremely dramatic. It's definitely a very serious character study, and not a fun action flick like it's predecessors. The movie is also shockingly violent; and it's the second 'X-MEN' film to be rated R, in as many years (following last year's blockbuster 'DEADPOOL'). Hugh Jackman is also fantastic in the lead, giving arguably his best performance in the role. For all of these reasons, I really respect this movie. Like I said, it's not a fun comic book flick (like some might be expecting), but it is a really well made drama film. It's actually the type of superhero movie that could finally get an Oscar nomination for Best Picture, but we'll have to wait and see about that.
at 7:37 PM
Labels: 20th Century Fox, Hugh Jackman, Logan, Marvel Studios, Patrick Stewart, Reviews