"Get Out" Review by Tim Hellman 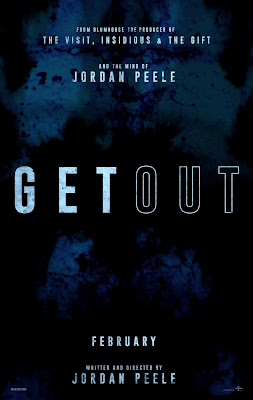 GET OUT': Five Stars (Out of Five)

The new horror flick from writer/director/co-producer Jordan Peele (in his directorial debut). The film is also Peele's first venture into the horror genre, as he's previously only worked in comedy (most notably on the TV shows 'KEY AND PEELE' and 'MADTV'). The story revolves around an interracial couple, that visits the estate of the wealthy white woman's parents, where things don't seem quite right there (especially for people of color). The movie has been a huge hit at the Box Office, and it's also received almost unanimous rave reviews from critics and fans alike. I think it's a modern horror masterpiece.

Chris Washington (Daniel Kaluuya) is an aspiring photographer that's about to visit the parents of his girlfriend, Rose Armitage (Allison Williams), for the first time. He's concerned because Rose, who's white, hasn't told her parents (Bradley Whitford and Catherine Keener) that Chris is black yet. Things are definitely awkward, upon meeting the girl's parents, and they only get stranger as Chris meets other people at the estate. Things especially don't seem right with the family's servants; who are both black, and they also both appear to be under some kind of possessive hypnosis.

The movie is extremely creepy, and masterfully directed (almost in a classic Hitchcockian way). It's also very witty, and full of biting social commentary. It's exaggerated, but it really does make you feel what it might be like to be a person of color, in a world ran by privileged (and usually quite bigoted) white people. The performances are all good (especially Kaluuya in the lead) and I think Peele has definitely proven himself to be a very talented, and quite diverse, filmmaker. I can't wait to see what he does next, and this is definitely one of the best horror movies in recent years!
at 4:00 PM
Labels: Get Out, Jordan Peele, Universal Pictures