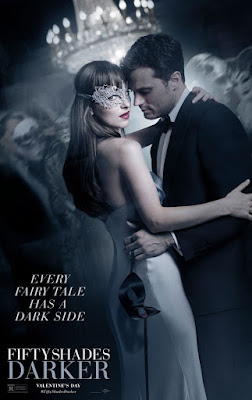 'FIFTY SHADES DARKER': One and a Half Star (Out of Five)

The sequel to the 2015 blockbuster erotic romance 'FIFTY SHADES OF GREY'; both films are based on the novels (of the same names) by E.L. James. James's husband, Niall Leonard, wrote the screenplay for this installment, while James co-produced it, and James Foley directed the movie. Actors Dakota Johnson and Jamie Dornan reprise their starring roles from the first film; and it costars Eric Johnson, Eloise Mumford, Bella Heathcote, Rita Ora, Luke Grimes, Marcia Gay Harden and Kim Basinger. The movie's gotten nearly unanimous negative reviews from critics, and film fans alike (much like the first movie did), but it's been a hit at the Box Office, so far (like the first one was as well), due to it's obsessive book fan base. Both of the novels, and their film adaptations, have been heavily criticized for promoting sexual abuse and violence against women (by The National Center on Sexual Exploitation, and various other people and groups); although the movies are supposedly extremely toned down from the novels their adapted from. I found this sequel to be slightly better than the first one (but just barely though).

As the movie opens, Anastasia (Johnson) is still trying to move on from her abusive relationship with Christian (Dornan); while Christian is still stalking and sexually harassing her (but this time he promises he'll change). Anastasia eventually gives into his advances, except this time she insists they play by her rules. Christian agrees, while he continues to abuse her (but not quite as badly as in the first film). Other crazy stalkers, and insane exes from Christian's past, further complicate their relationship this time though.

I have a huge problem with the wrong messages these movies, and the books they're adapted from, give their viewers (and readers). If it wasn't so romanticized, and the Christian character was treated more like the negative sexual predator that he is, they wouldn't be so bad; but as it is, these movies (and the books they're based on) are completely irresponsible and harmful to the young and impressionable. They're also really cheesy, and poorly written and acted. This one is a little better made than the first one though, and the Christian character does actually start to change a little (by the end of the movie) but he should have never been given the chance to!