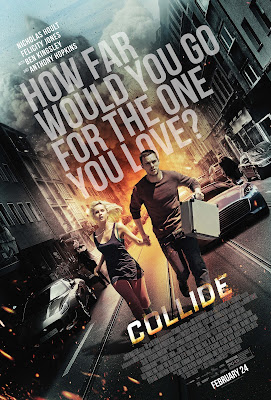 'COLLIDE': Three and a Half Stars (Out of Five)

An action flick about a retired American drug dealer, in Germany, who goes back to work for his former boss in order to make enough money to get his dying girlfriend a new kidney. The movie stars Nicholas Hoult, Felicity Jones (of 'STAR WARS' fame), Anthony Hopkins, Ben Kingsley and Marwan Kenzari. It was directed by Eran Creevy (who also helmed 2013's outstanding 'WELCOME TO THE PUNCH'), scripted by Creevy and F. Scott Frazier (who also wrote this year's 'XXX: RETURN OF XANDER CAGE'), and it was co-produced by action master Joel Silver. The film has received mostly negative reviews from critics, and it's bombing at the Box Office, but I found it to be somewhat entertaining.

Casey Stein (Hoult) is an American who lives in Cologne, Germany, and works for a drug dealer by the name of Geran (Kingsley). He meets another American, named Juliette Marne (Jones), bartending at one of the clubs Geran hangs out at. The two take an immediate liking to each other, but Juliette tells him she could never date anyone that works for Geran. So Casey quits his job, and the two fall in love, but due to Juliette's heavy drinking, her kidney fails one night. She's unqualified for a transplant, because she's an American citizen, so Casey suggests they move back to America and get her a new kidney there. He decides to do one more big job for Geran, against Juliette's wishes, in order to make enough money to pay for this plan.

The movie has the feel of a cool 90s type action flick, but it never quite reaches that desired status. It's entertaining, and beautiful to watch at times though. The filmmakers couldn't have possibly gotten a better cast for this film too; Hopkins and Kingsley are so much fun to watch, and Hoult and Jones are both too good for this movie as well. It's the kind of film that definitely looks like it should be a lot better than it is, but it's still kind of fun though.
at 10:48 AM
Labels: Anthony Hopkins, Ben Kingsley, Collide, Felicity Jones, Nicholas Hoult, Open Road Films, Reviews