“Burlesque: Heart of the Glitter Tribe” Review by Anthony T 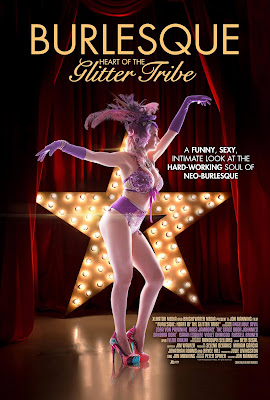 It’s been a while since I decided to review a documentary for this site. There hasn’t been any interesting subject matter than interested me. When I heard about “Burlesque: Heart of the Glitter Tribe”, I was interested in it because I know about it about it but not in depth. It also helped that the trailer looked interesting to see what this is all about.

The film documents a group of burlesque performers who perform in front of people to explore themselves. They use their bodies to pretend to be someone different. The documentary also goes into the personalities and lives of these performance and the whole scene as a whole.

What makes this good was the fact that I got a look into the world burlesque and lives that the performers leave. Director Jon Manning does a very good job going into the lives of the performances and why they choose to express themselves through the art form of burlesque. It made the people that he focuses on interesting to watch as they come from different backgrounds. The other thing that I liked about this documentary was the fact the people that Manning interviews are likeable. He does that by focuses on the people themselves and their daily lives instead of making the purpose of the dance as the centerfold of the documentary. It helped keep me turned into the subject and interested in these people.

If there was one thing that I didn’t like about this, it was the fact that it didn’t focus on the promoter’s side of the subject. I would’ve at least liked to have known how a show gets put together. I was interested in knowing what makes a person want to put a show of this nature together or getting to the venue to finding the people who perform them. It would’ve made this subject more interesting as it adds to the art form. This would’ve made this a better film as I would’ve gotten all I wanted to know on this subject. Still, this worth checking out.

This was a good documentary that does a solid job going into the people that perform this art form for little or no money. Even though I was left wanting more in this documentary, “Burlesque Heart of the Glitter Tribe” that does a good job focusing on the performers and its subject.