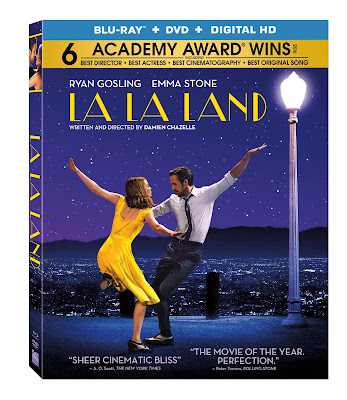 La La Land is more than the most acclaimed movie of the year — it’s a cinematic treasure for the ages that you’ll fall in love with again and again. Emma Stone and Ryan Gosling star as Mia and Sebastian, an actress and a jazz musician pursuing their Hollywood dreams — and finding each other — in a vibrant celebration of hope, dreams, and love.

Damien Chazelle’s magical interpretation of the City of Angels is destined to be a modern classic and an icon of the era. The home entertainment release includes the breathtaking film to watch again and again, as well in-depth bonus material revealing the untold story of how Damien’s passion project came to life. The 4K Ultra HD, Blu-ray and Digital HD special features include audio commentary by writer/director Damien Chazelle and composer Justin Hurwitz, and 10 behind-the-scenes featurettes including: “Another Day of Sun: They Closed Down a Freeway” which gives a behind-the-scenes look at how Damien Chazelle and his team had only two shoot days to make the film’s spectacular opening number a reality; “La La Land’s Great Party,” looking at the creation of the Hollywood Hills party scene; “Ryan Gosling: Piano Student” showing how hard Ryan Gosling worked to truly play the piano as Sebastian; “Before Whiplash: Damien Chazelle’s Passion Project,” that uncovers the story of La La Land’s origins; “La La Land's Love Letter To Los Angeles,” in which the term La La Land is explained; “The Music of La La Land” delving into the process of creating the iconic music; “John Legend’s Acting Debut” featuring the Grammy®-Winning singer’s thoughts on being in the film; “The Look of Love: Designing La La Land,” with interviews with the film’s design team; “Ryan and Emma: Third Time’s the Charm,” marking the third time in which Ryan Gosling and Emma Stone have starred on screen together, and “Epilogue: The Romance of the Dream,” exploring the extraordinary ending to the film. The 4K Ultra HD, Blu-ray and Digital HD also feature “Damien & Justin Sing: The Demos”, showing the original pitches for the film. The 4K Ultra HD and Blu-ray of La La Land will feature a Dolby Atmos soundtrack remixed specifically for the home theater environment to place and move audio anywhere in the room, including overhead.