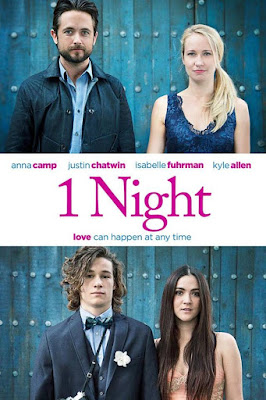 Romantic films is something that yours truly doesn’t catch a lot as those film as it’s usually not my cup of tea. When I first heard about 1 Night, I was drawn in by the premise which sounded interesting. It was enough to at least take a look at the film since I haven’t done a romantic film review in a while.

The film follows two couples. A thirtysomething couple (Anna Camp, Justin Chitin) whose relationship is on the rocks and trying to rekindle the flame that made their relationship and a couple of high school teenagers who explore their devotion to each other during the course of one night.

It’s been a while since I saw a good film involving relationships. In fact, I can’t remember the last romantic film that I’ve seen that I liked since I’ve been watching mostly horror and comic book films for a while. But I have to say, “1 Night” is a very good film from start to finish as I enjoyed this film a lot. One of the reasons the film was very good was the direction from writer/director Minhal Baig. What I liked about his direction was the way the film moves at a good pace. Baig makes sure that there isn’t any dead spots in the pace of it. This film moves at a very good pace and its 75 minute running time is perfect for the story at hand. The other thing that that I liked about Baig’s direction was the way that he gets good performances from his cast. He makes sure that he gets the chemistry between his cast that he needs to make his screenplay work onscreen. It help makes the romantic aspects of the screenplay work well on screen.

There were also some good performances from the leads Anna Camp, Justin Chatwin, Isabelle Fuhrman and Kyle Allen. All of these actors did make sure that their characters were interesting by bring some personality to them. It made some the scenes entertaining as it kept me interested the relationships in the film and the characters. They also had a good dynamic with each other as it helped with making the relationships between each of the couples interesting.

The screenplay written by Minhal Baig was a good one. I liked how he develops each of the two mains relationships in the film. Whether it’s going into the past through dialogue or the night at hand, everything is done in a way that makes each of the stories interesting and entertaining. The other thing I liked about this screenplay was its ending. I won’t go into it but it makes you think about what you just saw and gives you that makes you wonder type of feel after watching it. It works as it’s something different and it’s not what you typically see in a film like this.

For a person like me that you usually don’t watch these types of films, I have to say I really enjoyed this film from start to finish. With good direction and entertaining performances from its leads Anna Camp, Justin Chatwin, Isabelle Fuhrman and Kyle Allen, “1 Night” is an entertaining date film.