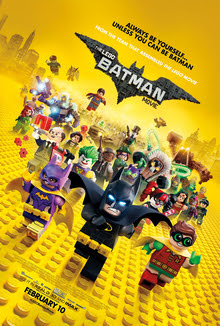 'THE LEGO BATMAN MOVIE': Five Stars (Out of Five)

A spin-off to 2014's blockbuster computer-animated hit 'THE LEGO MOVIE', focusing solely on the DC comics character Batman (and his world). It was directed and co-written (with 4 other screenwriters) by Chris McKay (a regular director of the animated TV series'ROBOT CHICKEN'), and Phil Lord and Christopher Miller (the directors and co-writers of 'THE LEGO MOVIE') served as producers on this film. The movie stars the voice talents of Will Arnett (reprising his role as Batman, from 'THE LEGO MOVIE'), Michael Cera (Arnett's costar from the popular TV series 'ARRESTED DEVELOPMENT'), Zach Galifianakis, Rosario Dawson, Ralph Fiennes, Jenny Slate, Hector Elizondo, Doug Benson, Zoe Kravitz, Conan O'Brien, Jason Mantzoukas, Billy Dee Williams (reprising his role as Harvey Dent, from the 1989 live action 'BATMAN' movie) and many others. It's produced by Warner Animation Group and DC Entertainment, and it's of course based on the 'Batman' DC comic books and the Lego Construction Toys. The film has received nearly unanimous rave reviews from critics, and it's expected to be a huge hit at the Box Office. I loved it as well.

Batman (Arnett) is becoming more and more of a loner; and he fears getting close to anyone, because he doesn't want to lose them (like he did his parents). He accidentally adopts an orphan, named Robin (Cera), and Alfred (Fiennes) encourages him to bond with the boy. At the same time The Joker (Galifianakis) is plotting something, and the new Commissioner, Barbara Gordon (Dawson), wants to work with Batman to stop him. Batman of course rejects her help.

The film is once again hilarious, like the original Lego movie, and it also, once again, has some great psychology; possibly the best of any 'BATMAN' movie. The characters are all really well developed, as well, and they're perfectly cast too (especially Arnett, once again). At first the drama feels forced, but it's also always comedic, and by the end of the film, it's also quite touching. The movie pretty much has it all, just like the first one, and it works on every level. It's also a really well made kids' film, that also appeals to adults (equally as well). The movie is definitely a 5 star film (just like the first one is).
at 8:35 PM
Labels: Michael Cera, Reviews, Rosario Dawson, The Lego Batman Movie, Warner Brothers, Will Arnett, Zach Galifianakis